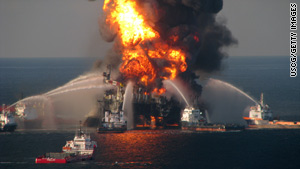 Washington (CNN) -- Oil giant BP and contractor Halliburton knew of potential flaws in the cement slurry used to reinforce the oil well below the Deepwater Horizon rig before it exploded in April, according to a letter Thursday from the lead investigator for a federal probe of the Gulf oil disaster.

The letter from Fred Bartlit Jr. to the National Commission on the BP Deepwater Horizon Oil Spill and Offshore Drilling said that tests in February on a cement slurry similar to what was used on the Macondo well showed instability -- and that both companies had the data.

According to Bartlit's letter, the cement was poured to stabilize the well on April 19 and 20. The 20th was the day of the explosion on the Deepwater Horizon rig above the well that killed 11 workers and caused the worst oil spill in U.S. history.

"Halliburton and BP both had results in March showing that a very similar foam slurry design to the one actually pumped at the Macondo well would be unstable, but neither acted upon that data," the letter said.

"Halliburton (and perhaps BP) should have considered redesigning the foam slurry before pumping it at the Macondo well," the letter continued.

The news caused Halliburton stock to drop in value by almost 8 percent by the end of trading Thursday, to $31.68 a share. U.S. Rep. Edward Markey, D-Massachusetts, called for the oil spill commission to get full subpoena power, and for BP CEO Bob Dudley to agree to testify before Congress.

"The fact that BP and Halliburton knew this cement job could fail only solidifies their liability and responsibility for this disaster," Markey said in a written statement. "This is like building a car when you know the brakes could fail, but you sell the cars anyway."

In a report on the incident issued by BP on September 8, the company admitted that "weaknesses in cement design and testing, quality assurance and risk assessment" contributed to the explosion, but put the blame fully on Halliburton. Halliburton responded to the report by saying that it had noticed "a number of substantial omissions and inaccuracies."

Mark Bly, BP's head of safety and operations, said in a video accompanying BP's report that Halliburton "did not conduct comprehensive lab tests that could've identified potential problems with the cement." But he added, "We believe that BP and Halliburton working together should have better identified and addressed the issues underlying the cement job."

Bartlit emphasized in his letter Thursday that cementing failures are a known hazard in the oil industry, with specific tests such as a "negative pressure test" and "cement evaluation logs" designed to identify cementing problems. However, he wrote, workers at BP and possibly the company that operated the Deepwater Horizon rig, Transocean, "misinterpreted or chose not to conduct such tests at the Macondo well."

The mile-deep well was pronounced dead in September when workers completed sealing it off.

As part of the kill process, the workers drilled into the annulus, or the outer ring of the well. No oil was found there, which could be an important clue in the investigation.

Retired Adm. Thad Allen, who led the government's response to the spill, said at the time that a possible cause of the explosion was "further down in the well, there was some kind of a crossover between the annulus and the casing pipe where it was cemented."

A commission hearing on the disaster is scheduled for November 9, but Bartlit's letter said he was notifying the commission about the cement slurry issue immediately in order to "facilitate your consideration of their implications for offshore drilling safety."

While technical in nature -- using the word "hydrocarbon" to refer to oil, for example -- the letter depicts a process that failed to detect a potential cause of the disaster.

"We have known for some time that the cement used to secure the production casing and isolate the hydrocarbon zone at the bottom of the Macondo well must have failed in some manner," the letter said, noting that BP used a "nitrogen foam cement" recommended and supplied by Halliburton.

As part of the investigation, the letter said, Chevron conducted independent tests of similar cement slurry materials supplied by Halliburton and found the mix to be unstable.

"Halliburton has stated publicly that it tested the Macondo cement before pumping it on April 19th and 20th, and that its tests indicated the cement would be stable," Bartlit's letter said. "When Chevron informed us of the preliminary results of its tests, we asked Halliburton to give us all of the data from all tests it had run on the Macondo cement slurry."

That information revealed the two February tests by Halliburton of a slightly different cement slurry mix that showed it was unstable, the letter said.

"Halliburton provided data from one of the two February tests to BP in an email dated March 8, 2010," the letter said. "The data appeared in a technical report along with other information. There is no indication that Halliburton highlighted to BP the significance of the foam stability data or that BP personnel raised any questions about it. There is no indication that Halliburton provided the data from the other February test to BP."

The Halliburton information also disclosed an additional test in early April, prior to the explosion, that involved the same mix that was used on the Macondo well and also found it to be unstable, the letter said.

"The results of this test were reported internally within Halliburton by at least April 17, though it appears that Halliburton never provided the data to BP," the letter said. Halliburton then conducted another test using a modified procedure, the letter said, and the result for the first time indicated the slurry design would be stable.

However, the letter said investigators were unsure if that fourth test was completed before the cement slurry was poured at the Macondo well, and that Halliburton reported the positive result to BP after the blowout.