By Steven Lunt, for CNN 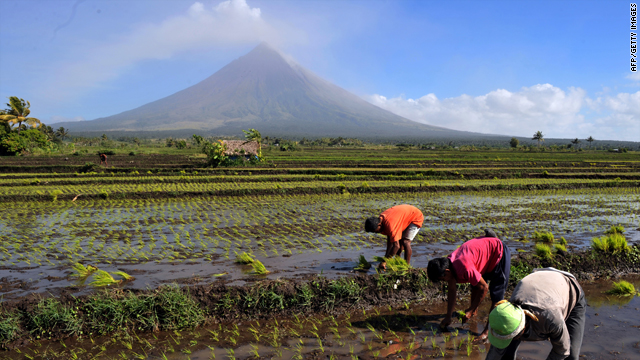 Filipinos suffered many natural disasters in 2009, including Mount Mayon's volcanic eruption in December which forced tens of thousands out of their homes and into temporary shelters for several weeks.
STORY HIGHLIGHTS

Manila, Philippines (CNN) -- On the streets of Manila, flight attendant Lesly succinctly sums up her view on life: "Being positive and optimistic -- it's the only way. If you think too deeply about all the problems here, it'll only get you down and stop you from doing anything -- or make you want to leave."

Lesly would appear to not be alone. In a survey conducted by the nonprofit research group Social Weather Stations, 89 percent of the 2,100 Filipinos surveyed said they entered 2010 with hope, rather than fear. This, despite a rash of tragedies that struck the Philippines last year.

Hope seems to run high in the Philippines, compared to other countries that might be expected to have more causes for optimism -- such as Germany, where those expressing hope for the coming year has not exceeded 58 percent since 1991, according to the Allensbach Institute, a public opinion research center in southwestern Germany.

It is perhaps surprising that so many Filipinos have managed to stay so hopeful, since 2009 was such a grim and often lethal year for the Philippines. After losing their beloved former president -- Corazon Aquino passed away in August ---- the country suffered a series of traumatic events.

Four typhoons flooded most of Manila and much of Luzon last September and October -- killing hundreds of people, displacing hundreds of thousands, destroying their homes, and causing millions of dollars worth of damage to property and crops.

In November, 57 civilians -- including women and journalists -- were killed indiscriminately, in the Maguindanao massacre.

Then Mount Mayon's volcanic eruption in December forced tens of thousands out of their homes and into temporary shelters for several weeks.

And on Christmas Eve and Boxing Day, two ferries sank near Manila in separate incidents, with more than two dozen reported missing.

As this socially and politically fragmented archipelago experienced so many catastrophes in 2009, you might expect its people's spirit to be broken, or at least daunted by the potentially dismal prospect of another difficult year -- with electoral contests that could turn ugly and violent.

President Gloria Macapagal-Arroyo was upbeat in her New Year message. She said the country's automated voting system in this year's elections, and the world's recovery from the global economic downturn, were "gifts from an unfolding future that we greet with hopefulness."

But after so many tragedies last year, how could ordinary Filipinos be positive about 2010?

Religion in this predominantly Catholic country certainly influences many attitudes. In his New Year's message, Archbishop Angel Lagdameo -- a former president of the Catholic Bishops' Conference of the Philippines -- said 2009 would leave behind "the haunting memory of unsolved corruption, memory of the victims of typhoons and the massacre..." But the prelate believed that Filipinos should not lose hope this New Year; they should instead take inspiration from ordinary people and their extraordinary acts of courage: "Our country has had its heroes coming from the ordinary citizenry, who held no political power to influence, but brought honor to our country through their personal charisma and talents."

Lagdameo cited the heroism of 18-year-old construction worker Muelmar Magallanes, who died after saving more than 30 people from rampaging flood waters at the height of tropical storm Ketsana. Magallanes was named as one of TIME magazine's top 10 Heroes of 2009. The archbishop also applauded Efren Peñaflorida, CNN's Hero of the Year, for selflessly educating thousands of street children with his "pushcart classroom."

"There are hundreds of ordinary citizens, unknown heroes who make up for 'infamous' leaders who bring dishonor and poverty to our country," Lagdameo added.

Flight attendant Lesly believes close families and friends provide a strong network of support for Filipinos: "They help each other out when the going gets tough, as it so often is in our country. Just look at what happened in the typhoon flooding. Filipino families are usually very large -- and when help is needed, everyone comes together."

And if you happen to live in a volcanic country perhaps a pragmatic attitude is a prerequisite to enjoying life -- as exemplified by Let, a fashion accessory retailer in Manila: "There's not much we can do about the natural calamities -- that's just in the physical nature of our country. So we just get on with life, enjoy good humor, and don't worry about a future beyond our control. Filipinos really know how to live in the present -- and take nothing for granted."

In November there was at least a day's respite for the Philippines, as boxing champion Manny Pacquiao fought to bring joy and pride to millions of Filipinos, by earning yet another world title for his country. As I filmed crowds in Manila watching this fight, capturing their ecstatic reactions to Pacquiao's connecting punches, it was striking how the passionate Filipino fans were totally absorbed in the moment -- enjoying their excitement in an electric, euphoric atmosphere among families and friends.

A potentially momentous New Year may have just begun for the Philippines. After almost a decade of an increasingly unpopular Arroyo administration, 2010 might herald a new era in government, possibly presided over by the clear leader in opinion polls, Noynoy Aquino -- the son of national heroes Ninoy and Corazon Aquino, who remain widely respected as icons of democracy in the Philippines for their bravery in fighting for social justice.

A common opinion is expressed by Mario, a hotel manager in Boracay: "There's always the problem of violence, but maybe 2010 will bring us some improvement with better government. We need an honest president to clean up corruption by setting a good example, who cares about all the poor people."

The next few months will be interesting as politicians jostle for position, while observers strive to ensure these fiercely fought elections are fairly conducted.

And many journalists here will be hoping that in this New Year, they'll be able to report some happier news from the Philippines.