No tsunami warning after Pacific quake 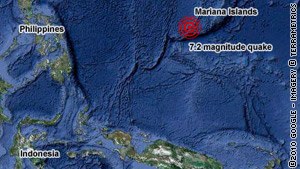 The quake struck 233 miles west-southwest of Hagatna, Guam, and was 2.9 miles deep in the earth's crust.
STORY HIGHLIGHTS
RELATED TOPICS

Did you feel the quake? Share your story or images with CNN iReport.

(CNN) -- A 7.2-magnitude earthquake has struck south of the Mariana Islands, according to the U.S. Geological Survey.

The Mariana Islands -- an archipelago in the western Pacific Ocean -- are made up of two U.S. territories, Guam and the Commonwealth of the Northern Mariana Islands. The islands sit about three-quarters of the way from Hawaii to the Philippines.

The Pacific Tsunami Warning Center did not issue a tsunami warning after the quake, which struck at 7:19 a.m. Saturday (5:19 p.m. ET Friday).

"We wouldn't expect any kind of significant tsunami for this event," said the center's director, Charles McCreery, noting that the quake's magnitude was relatively low to provoke one.

There were no immediate reports of casualties or damage, emergency management officials said.

CNN's Dan Gilgoff and Talia Kayali contributed to this report.