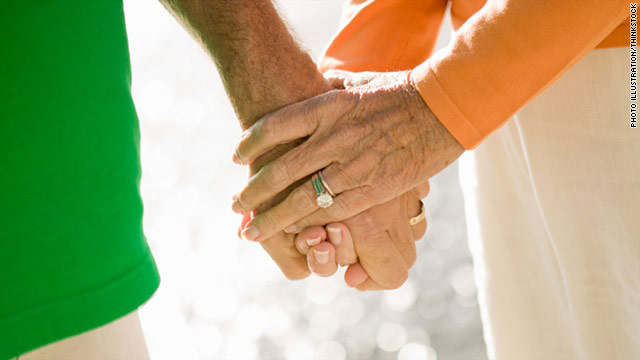 (Health.com) -- Marriage is thought to have a number of health benefits, including greater longevity, less stress, and a lower risk of heart disease, diabetes, and depression.

Now, a new study suggests you can add a better survival rate after heart surgery to the list of health perks. Overall, people who were married when they had coronary artery bypass surgery were 2.5 times more likely to be alive 15 years later than unmarried people, and the happily married fared better than those in unhappy marriages.

But there's a catch: Men in the study seemed to benefit regardless of whether their marriage was good or bad (although happier unions were even more protective than unhappy ones). The picture was less clear for women, however.

Health.com: 9 ways you can help someone who's depressed

Although researchers saw a similar effect in women as in men, married women ultimately had no survival advantage over single women. However, the study may not have had enough women -- 52 versus 173 men -- to see an effect.

Kathleen B. King, Ph.D., R.N., professor emeritus in the School of Nursing at the University of Rochester, in New York, and lead author of the study, says that the survival benefit, at least of a good marriage, would probably be the same for women as men.

Signs of a heart attack

Married people tend to have more support in making lifestyle changes, like eating better and exercising, and may experience less stress. These health perks could be amplified for people who are happily married, King says.

Health.com: How to stay up when someone you love is down

In fact, marital status was a better predictor of long-term survival after bypass surgery than traditional heart-disease risk factors like smoking, high blood pressure, diabetes, and prior heart attacks. And the benefit may be true for anyone in a long-term, supportive relationship, married or not.

"I don't think it has to be [a] traditional marriage," King says.

The current study, published in Health Psychology, included 225 people who had heart bypass surgery between 1987 and 1990. The researchers asked patients about their marital status the day before their surgery, and asked people to rate their marriage satisfaction a year later.

The researchers used hospital and national records to figure out the number of people who died within 15 years of their surgery.

"I think for men just having somebody around is important [but] it has been proposed in the literature that the emotional component of a marriage is more important to women," King says.

It's possible that women may have less to gain from marriage because they tend to have larger support networks than men, notes Matthew M. Burg, Ph.D., associate clinical professor of medicine at Columbia University, in New York City.

Burg points out that the beneficial aspects of marriage may also be different for different people. For example, in retirees, the most positive aspect to having a spouse could be that it helps them get out of the house and socialize.

Health.com: 28 days to a healthier relationship

Unfortunately, for people who are not in a committed relationship and do not have a network of friends, "it's not that easy to 'treat' low social support," Burg says. "Some people find social interactions somewhat distressing [and] it's not just the kind of thing where it's like, 'OK, go make friends,'" he adds.

Burg says that people who fall into this category could do better with more regular health-care follow-ups.

"As a nurse, we would really make sure that people who were not married had the right support system, like friends or family or a visiting nurse, when they went home," King says.

In coronary artery bypass surgery, doctors use a healthy blood vessel, often one taken from the upper thigh, to reroute blood flow around a clogged heart artery. But the new blood vessel may be even more prone to "atherosclerosis" or plaque buildup, than the original vessel.