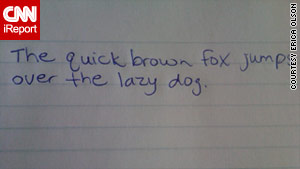 Handwriting is much more than a way to communicate. It's also a visual representation of our personality.
STORY HIGHLIGHTS
RELATED TOPICS

(CNN) -- When Erica Olson was in the eighth grade, she and her best friend shared everything: clothes, shoes, gossip -- even their handwriting style.

The pair were inseparable and spent months practicing identical signatures and smiley faces in the margins of their homework after school. But when they grew apart during high school, Olson decided that it was time for a change.

"I didn't want my handwriting to look like hers," Olson explained. "I wanted it to be more round and bubbly, like the handwriting of the most popular girls in school. To that end, I set upon a project of changing my handwriting completely. I have a distinct memory of sitting in earth science class, painstakingly filling out a worksheet assignment as I trained my hand to the new 'bubble' style."

Only after months of practice was Olson finally content with her results.

"It took me quite a long time to write in this handwriting to begin with, but as I grew accustomed to it, I could write nearly as rapidly as I could in my old style. I haven't really changed my handwriting since then, but as I finished high school and moved into college, I became less concerned with how others would view my handwriting, so I let the letters become sloppier and less bubbly," she said.

Stories like Olson's are not uncommon. Whether we write in print, cursive or a combination of both, our handwriting is much more than a vehicle for communication. It is a visual representation of our personality: of who we are, what we've learned and who we want to be.

Some left-handed children are particularly susceptible to changes in their handwriting as their parents worry about how they will adapt to a world designed for right-handed people. Sunny Jamil was just a toddler when his grandparents noticed that he began picking up objects with his left hand. But instead of encouraging him to use his right hand like his other family members, they embraced the trait.

"I picked up the pencil with my left hand when I was a child," Jamil said. "My maternal grandmother discouraged those who desired that I be taught to do it with my right hand. She may be the most significant influence to my current writing methods."

But being left-handed also came with many challenges. It took Jamil's parents several months to teach him how to write without smudging the paper with his hand. Years later, Jamil says that despite his improvement, he is still searching for the perfect handwriting technique.

"Ever since I began to hold a pencil, I've been told by my elders and friends that my handwriting is pleasing to look at," Jamil said. "On the other hand, I have a self-critical view where I feel that it is OK and can always improve. My secret internal, and nearly impossible, goal is to be able to perfect it to such an extent where I am able to duplicate how every letter/word looks the same way every time."

Family and friends are not the only factors that can spark an abrupt handwriting switch.

Lisa Jones, a bookkeeper from Perry, Michigan, says that her computer use has changed her writing.

"My father started teaching us to write before we entered school and was very insistent on having good cursive and printing," she said. "My handwriting has declined as I've used the computer throughout the years."

But despite these observed relationships between handwriting and culture, there are still those who say that their handwriting remains above the influence. Carmen Espina, a college professor in Guaynabo, Puerto Rico, says that she is happy with her handwriting and has never tried to change it.

"I think fast and I write fast," she said. "When writing, I want to describe everything as detailed as possible. I can't say that anyone has influenced my handwriting. I write for myself and I do not intend others to understand it."