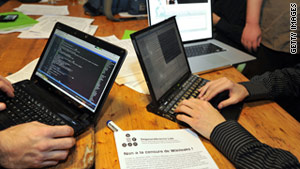 The Senate sergeant at arms ordered a review of all Senate-related sites after Senate.gov was hacked over the weekend.
STORY HIGHLIGHTS
RELATED TOPICS

Washington (CNN) -- The Senate sergeant at arms has ordered a review of all websites associated with the chamber after an intruder hacked into the server that supports Senate.gov over the weekend.

"Senate sergeant at arms staff traced the source of the access to a vulnerability in a portion of the website that is maintained by an individual Senate office, and immediately took steps to remove the vulnerability," Sergeant at Arms Martina Bradford said in a statement Monday.

Despite the intrusion, no user account information was compromised, Bradford said, noting that whoever hacked into the server "was only able to read and determine the directory structure of the files placed on Senate.gov." The server accessed contained only files intended for public consumption, she said.

Bradford and her team are conducting a review of all the websites hosted by Senate.gov and are urging individual offices that maintain some of those sites to take steps to enhance their security.

Bradford's statement didn't identify who or what may have been behind the hacking.

The Department of Homeland Security's Computer Emergency Readiness team is working with the Senate and other law enforcement authorities to investigate and analyze the incident, DHS spokesman Chris Ortman said.

CNN's Ted Barrett and Jeanne Meserve contributed to this report.