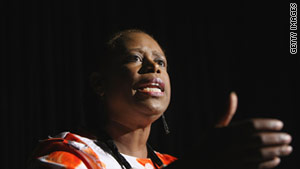 Former Rep. Cynthia McKinney: "It's important that people all over the world see the truth."
STORY HIGHLIGHTS

(CNN) -- A former U.S. congresswoman slammed U.S. policy on Libyan state TV late Saturday and stressed the "last thing we need to do is spend money on death, destruction and war."

The station is fiercely loyal to Moammar Gadhafi and her interview was spliced with what appeared to be rallies in support of the embattled Libyan leader.

She said she was invited to Libya by the "nongovernmental organization for fact-finding," adding that she intends to bring more people to the country soon so that "they too can understand."

NATO warplanes have been pounding military targets since March after the U.N. Security Council approved a resolution to protect civilians by any means necessary, as Gadhafi's forces try to quash a nearly three-month revolt against the leader's roughly 42 years of rule.

Gadhafi's government has repeatedly urged the international community to send fact-finding teams to Libya to report what's happening on the ground.

At one point during the interview, state TV cut to what it said were live airstrikes, hitting Gadhafi's compound.

"Is that a bomb?" McKinney asked.

"I want to say categorically and very clearly that these policies of war ... are not what the people of the United States stand for, and it's not what African-Americans stand for," she told state TV.

The former Georgia representative also slammed the economic policies of U.S. President Barack Obama and said the government of the United States no longer represents the interests of the American people.

"Under the economic policies of the Obama administration, those who have the least are losing the most. And those who have the most are getting even more," she said. "The situation in the United States is becoming more dire for average ordinary Americans, and the last thing we need to do is to spend money on death, destruction and war."

Separately, McKinney appeared on state-run Press TV this week in Iran. She was reported to be in Tehran attending the International Conference on Global Alliance Against Terrorism for a Just Peace.