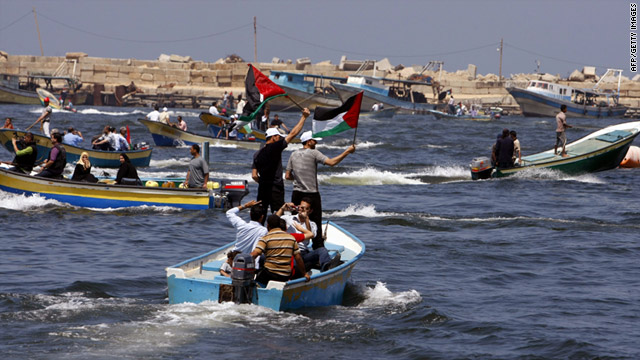 Palestinians rally Monday off the coast of Gaza City to mark the first anniversary of a deadly Israeli raid on a Turkish flotilla.
STORY HIGHLIGHTS
RELATED TOPICS

(CNN) -- On the first anniversary of the Israeli raid on a flotilla headed to Gaza, organizers of another flotilla planned for June held a news conference Monday that concluded with a minute of silence for the nine activists killed in that raid.

The event was held on the Mavi Marmara, the ship that was the scene of the raid, which led to the deterioration of relations between Israel and Turkey, its once strong Muslim ally.

Mavi Marmara -- owned by the Turkish Humanitarian Relief Foundation, or IHH -- and five other ships were on their way to Gaza carrying humanitarian aid and about 700 activists from various countries when Israeli soldiers swarmed aboard it in international waters on the night of May 30-31, 2010.

Eight Turks and one American of Turkish origin died. Istanbul pulled its ambassador from Israel after the incident and the post has remained vacant.

Huseyin Oruc, an executive from IHH, said Monday the flotilla that will set out in the last week of June in an attempt to break the Israeli blockade will consist of 15 ships and about 1,500 participants from 100 countries.

The ships will carry a wide variety of humanitarian aid for Gaza, ranging from children's toys to construction and medical supplies. They will be leaving from a variety of Mediterranean ports.

At the news conference, Evangelos Pissias of Greece read out a joint statement on behalf of the international flotilla organization welcoming the recent decision of Egypt to open the Rafah border crossing into Gaza.

However, he said, "We must continue to challenge this blockade. We call on all states, the United Nations and international organizations to support our action and demand that Israel refrain from attacking our vessels."

Egypt opened its border crossing into Gaza on Saturday. It had been mostly kept closed after Hamas, an Islamic militant group, got control of Gaza in June 2007.

Asked if the flotilla organizers are taking any measures to protect the people on board the ships in case of an Israeli raid, Ann Wright, representing the American boat that will be a part of this year's flotilla, told CNN, "There is not much we can do. They have got the weapons. We have no weapons. We don't want weapons. We are going non-violently."

The news conference ended with prayer and the minute of silence.

Monday evening in Istanbul, anger spilled out as several thousand Turks gathered in the city's central Taksim Square to mark the anniversary.

Chants of "Damn Israel" were interspersed with Arabic- and Turkish-language Islamic music as people waved Palestinian and Turkish flags at the event, which also was organized by the Turkish Humanitarian Foundation.

The crowd, including men, women and children, carried banners saying "Support Gaza," "Mavi Marmara martyrs are our honor" and "Palestine will win." They also sent Chinese lanterns into the sky and lit flares in red and green.

There was a moment of prayer. The crowd got loudest when chanting "Allahu Akbar."

One of the participants in the rally, Rabia Demirci, has registered to take part in the next flotilla. "I don't think (Israel) will attack after this," she said. "The Rafah crossing is open, too. God willing, it won't. But if it attacks, we will continue on our path again, saying on with resistance. No obstacle can block our path."

Palestinians also marked the day, with many taking to small boats off the coast of Gaza City.