California cracks down on rehab clinics after CNN/CIR investigation

Editor's note: To uncover this story on widespread fraud linked to California's drug rehab program, CNN's Special Investigations Unit has teamed up with the independent, nonprofit Center for Investigative Reporting as part of Anderson Cooper AC360's "Keeping them Honest" reports. AC360 airs Monday through Friday at 8 and 10 p.m. ET on CNN.

(CNN) -- A yearlong investigation by CNN and The Center for Investigative Reporting found widespread cheating and deception in California's taxpayer-funded drug rehab program for the poor. The problem is exacerbated by weak oversight of Drug Medi-Cal, part of the nation's largest Medicaid program.

State officials allowed a man convicted of organized crime to run a clinic despite a state law barring felons from doing so. The state approved another clinic operator even though he officially was blacklisted from billing Medicaid. And time and again, clinics accused of fraud and cited for serious violations have nonetheless managed to draw increasing amounts of government money.

Yet answers for the failures have been hard to come by. Clinic operators facing fraud allegations refused to answer detailed questions. So did top state health officials.

CNN and CIR spent weeks seeking a sit-down interview with authorities overseeing the Drug Medi-Cal program but were turned down. 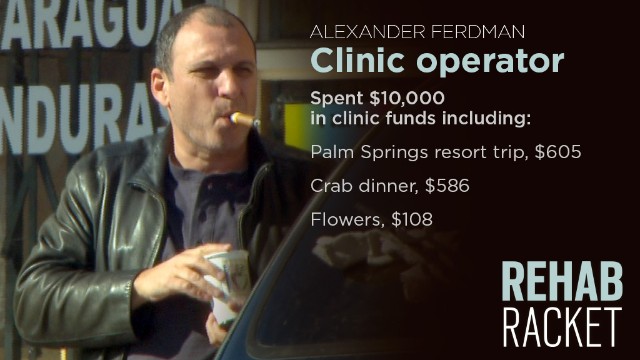 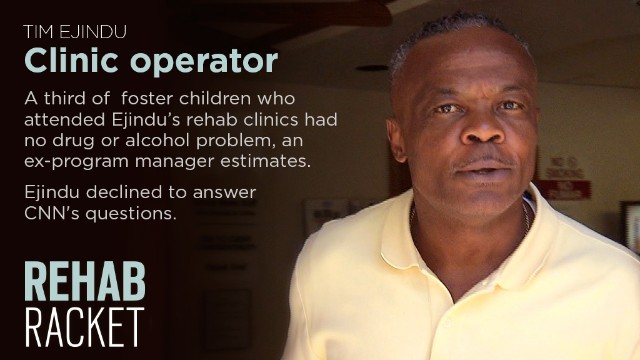 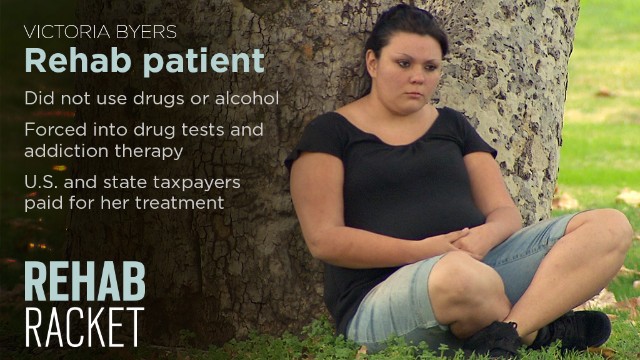 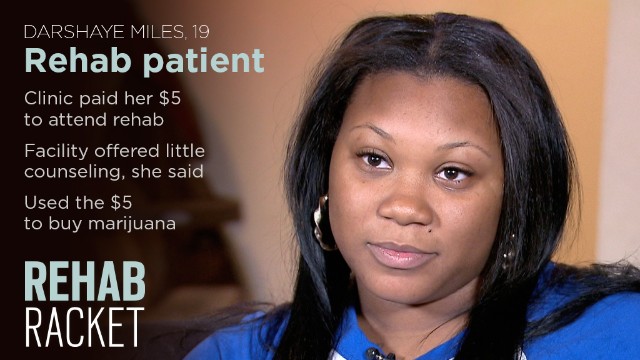 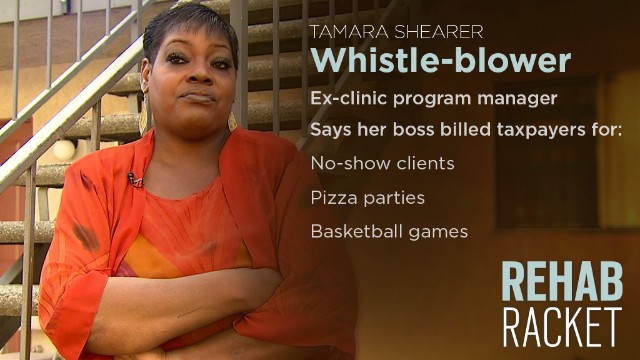 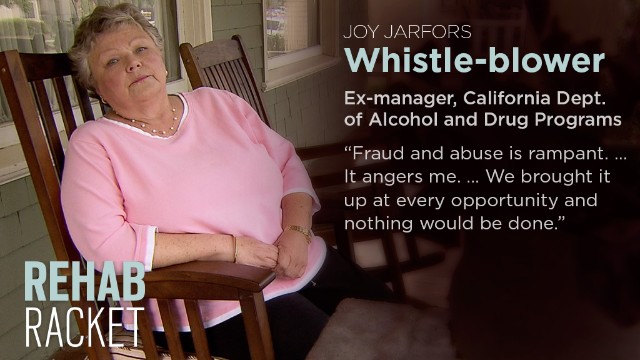 Federal Medicaid authorities rely on the Department of Health Care Services to combat fraud in the health insurance program for the poor, which uses state and federal funds. Toby Douglas, the agency's director, declined an interview.

Approached outside a public meeting at a state office building, Dooley said accusations of fraud are taken seriously.

"All allegations are given full and fair consideration, and you caught me running because I am late for a meeting," she said.

"We have a budget that we are just completing, and we have many priorities on our time," she added. "Information has been provided, answers have been provided."

"We are going to be fanning out statewide," Karen Johnson, the department's chief deputy director, said in an interview. "We are not going to stop just with those 16 clinics. We are going to review all of the Drug Medi-Cal providers in the state of California." Officials would not identify the targeted clinics, saying the information would compromise the investigation.

On Tuesday, Norman Williams, spokesman for the Department of Health Care Services said the state has now suspended 29 clinics in all, and expects to refer even more to prosecutors. Williams said he could not immediately determine whether the 29 included satellite sites of clinics.

Johnson vowed to tighten state oversight but disputed the notion that it has been lacking until now.

"I would say that's not a fair characterization," she said.

A California lawmaker said the department's recent actions were a good start, but he advocated for the state auditor to conduct an independent review of the rehab program.

"I want to know how this happened for so long, how pervasive is the fraud, and more importantly what can we do to change laws or regulations so the fraud doesn't occur in the future," state Sen. Ted Lieu, who represents parts of Los Angeles County, told CNN.

Lieu said he was motivated by his belief in rehabilitation programs as a crucial tool for reducing crime and the prison population.

"I became very concerned," he said, "that if we don't fix this fraud immediately, it would undercut the public support for this entire program."

Those who run troubled rehab clinics declined to give detailed interviews.

For more than a decade, George Ilouno has been banned from drawing state or federal funds in the Medicaid program due to a prior conviction of student loan fraud.

Still, his rehab clinic, GB Medical Services, has received rising sums of money since it opened in 2007, with its most recent annual funding at $440,000. He was arrested in March and charged with grand theft, filing false Medicaid claims and paying kickbacks. Ilouno pleaded not guilty.

He still was billing Medicaid in April when CNN and CIR confronted him in the parking lot of his Long Beach counseling center.

Ilouno said little more than "no, no, no," got in his Mercedes and sped off. His attorney later faxed a letter on Ilouno's behalf saying that counselors acted without the clinic's consent and that GB Medical will work on paying restitution, "if any." The attorney also said Ilouno was a certified counselor "and was thus authorized to bill for medical services rendered."

Los Angeles County authorities said that they were not aware of the arrest and that the clinic notified them that it would close effective July 1. A sign on the clinic door says it is no longer providing Drug Medi-Cal services.

I want to know how this happened for so long.
Ted Lieu, California state senator

Former employees of Tim Ejindu's clinics in Riverside and Los Angeles counties said they were pressured to falsify documents. A Los Angeles County audit of his clinic, the Pomona Alcohol and Drug Recovery Center, found evidence of what the county considers fraudulent practices.

At his red-tile-roofed counseling center in Pomona, Ejindu declined to answer questions and closed the clinic door on a reporter.

A third operator, Alexander Ferdman, was permitted to open a rehab clinic even after his felony conviction in 2000 for engaging in organized crime in Texas. State law calls for felons to be suspended from running Medi-Cal clinics.

Still, Ferdman has drawn millions since opening his clinic in 2003 -- and this year, it got a raise to nearly $2 million in annual funding.

Ferdman stopped in the parking lot of his Panorama City rehab clinic, Able Family Support, to defend his record.

"I was convicted, but it's not what it seems," Ferdman said. "There was no fraud, and there was no record of it in any way. It's a very long story."

The medical director for Able Family told CNN that the clinic is among those temporarily suspended by the state.

Ejindu, Ilouno and Ferdman did not reply to letters outlining reporters' findings and seeking additional comment.

Got a story idea or tip for CNN's investigations team? Go to cnn.com/investigate or click here to submit. CNN senior investigative producer Scott Zamost and CNN investigative correspondent Drew Griffin contributed to this report. This story was edited by Amy Pyle and Mark Katches, with contributions from Richard T. Griffiths of CNN. It was copy edited by Nikki Frick and Christine Lee.

Reprinted with permission of Center for Investigative Reporting.

Albuquerque police shot a homeless man in the back and killed him, and it was all caught on gruesome detail in a police video.
Captain told ransoms may go to terror group
updated 7:48 AM EDT, Wed June 25, 2014

A ship's captain, kidnapped by pirates in 2013, says the money used to pay his ransom went to Boko Haram.
Got a tip or story idea?

Share your tips or story ideas with CNN's team of investigative reporters and producers. Click on the link or go to cnn.com/investigate.
Phoenix VA officials put on leave after denial of secret wait list
updated 9:38 PM EDT, Thu May 1, 2014

The director of the Phoenix Veterans Affairs Health Care system and two others have been placed on administrative leave amid claims of a secret waiting list for care.
Veterans die on a VA hospital's secret list
updated 9:19 PM EDT, Wed April 23, 2014

At least 40 U.S. veterans died waiting for appointments at the Phoenix VA Health Care system, many of whom were placed on a secret waiting list.
Christie on traffic scandal: 'The answer is still the same'
updated 10:45 PM EST, Mon February 3, 2014

Embattled New Jersey Gov. Chris Christie forcefully stood by his account that he only found out about notorious traffic lane closures after they appeared in the media.
CNN Exclusive: Carnival knew of fire danger
updated 2:44 PM EST, Wed December 18, 2013

Records show problems with the Carnival Triumph more than a year before its ill-fated cruise earlier this year.
Veterans dying because of health care delays
updated 9:34 PM EST, Thu January 30, 2014

U.S. veterans are dying because of delays in diagnosis and treatment at VA hospitals.
Ex-Shell Oil president: 'I felt extorted'
updated 8:24 AM EST, Thu January 23, 2014

Consumers left angry and confused after the botched Obamacare rollout now have something else to worry about: misleading letters from insurance companies.
Ad firm asked to use Christie in post-Sandy campaign
updated 1:38 PM EST, Wed January 15, 2014

So much for a "clean" bill. The measure passed by Congress to fund the government and raise the debt ceiling also contains some goodies and gifts tucked into the 35-page bill.
Rehab racket: 'It was all lies'

Thousands of charities actually spend billions helping marketing executives get rich.
The beauty and the priest

All evidence pointed police to one conclusion: A priest had killed a beautiful 25-year-old schoolteacher.
Whistle-blower: IRS targeted me

The same day a documentary featuring a government whistle-blower premiered, the IRS told him he was being audited. Coincidence?
Sons kidnapped to Egypt

An American father fights for the return of his sons who were illegally taken to Egypt.
Luxury cruise fails inspection

A surprise inspection by the Centers for Disease Control has resulted in a failing grade for one of the plushest cruise ships afloat.
Teen sentenced in Mississippi killing

A white Mississippi teen faces 27 years in prison after killing a black man walking along a rural highway. The victim's family calls it a hate crime.
Is there a hate crime data gap?