Honey, I cheated with your checkbook

(LifeWire) -- When Cory Watson, a 23-year-old pharmacy technician from Paradise, California, noticed that a tax refund had been deposited into the joint checking account he maintains with his wife, he did two things. First, he headed to the mall where he quickly spent the $100 on new DVDs. Second, he kept his mouth shut. 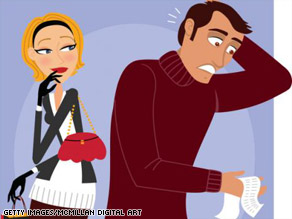 "I wasn't trying to be super sneaky about it, but it was kind of like, 'I think I'll head down and buy a couple of things'," he says. "Of course, my wife had no idea that the [money] had even come. She didn't find out until about a month later."

Call it secret spending, checkbook cheating or financial infidelity -- plenty of Americans are guilty of it.

Twenty nine percent of people in a committed relationship admitted to lying to their partner about their spending habits, according to a Harris Interactive survey of 1,796 people ages 25-55.

Women were slightly more likely than men to be dishonest; according to the 2005 survey, 33 percent of women had something to hide, as opposed to 26 percent of men.

Kathy Kitts, a 50-year-old brain development specialist from Germantown, Maryland, says she became a "secret shopper" when she had a part-time job at a clothing store four years ago.

"I would buy stuff and bring it home all the time, although I wouldn't necessarily bring it straight home," she says. "It would end up in the trunk of my car for a while and then in my closet."

Kitts' secret spending habits are fairly typical, says Tina B. Tessina, a Long Beach, California, psychotherapist and author of "Money, Sex and Kids: Stop Fighting About the Three Things That Can Ruin Your Marriage."

Not surprisingly, secret spending can sometimes be indicative of a larger problem.

Theo Pauline Nestor, a 46-year-old writer, teacher and mother of two from Seattle, Washington, found out her husband was surreptitiously using credit cards to fund a gambling habit that she said eventually cost the couple their marriage.

"He had seven credit cards in his name that were being sent to a different address," says Nestor, who detailed her experiences in the memoir, "How to Sleep Alone in a King-Size Bed." "I had a feeling something was wrong but I pushed it down. Now I tell people to trust their gut, to start asking questions and snooping around."

Tessina estimates 25 percent of the couples she sees for overspending are grappling with addiction issues, which can often cause a person's life to spin out of control.

"Addiction begins to adversely affect your life," she says. "Your spouse leaves you but you still keep doing it."

"If you find your spouse has been sneaking around on you -- and that's what this is -- that messes up your trust," she says. "Your marriage is really a business and if a spouse is secretly spending, that's undermining it in a really serious way. It's like they're embezzling."

Daniel Schoonmaker, a 28-year-old public relations executive from Grand Rapids, Michigan, says he wasn't so much a secret spender as a secret charger. Not only did he have $19,000 of debt his fiancée didn't know about (most of it related to a fixer-upper he bought in 2004) he charged more than $20,000 in wedding expenses that she assumed he'd paid in cash.

"Two weeks before the wedding we sat down and started discussing finances," he says. "She knew I had debt but she was surprised to hear how much it was. 'Panic attack' may be a more correct term."

Luckily, Schoonmaker and his new bride, Kristina, a 28-year-old insurance agent, were able to weather the financial maelstrom. The two came up with a budget, stuck by it, and, now, six months into their marriage, they're nearly debt-free. What's more, Schoonmaker says he's given up spending money behind her back.

"Marriage is a partnership," he says. "I don't feel right trying to hide things from her any more."

"People still need to be able to breathe, to buy a little fun here and there," she says.

But if one person spends money and isn't able to talk about it with the other, that may be indicative of a larger marital frustration.

"Marriage counseling can help with that," she says. "If it goes deeper, if the person has emotional pain and they're medicating by spending money -- that may require individual therapy." The best medicine all around, though, is to be financially informed, she advises.

How can you avoid the secret spending trap?

• Sit down with your partner once a month to talk about your finances. Don't be afraid to ask where the money is going.

• If you feel like there's something you're missing, order a credit report. You can request a free copy of your credit report once a year at www.annualcreditreport.com.

• If a spouse is indulging too much, don't yell or lecture or blame. Present the problem ("honey, the bills are too high") and try to get them to look at it with you. Running up the credit card doesn't have to destroy a marriage; working through a secret spending habit might just make it stronger.

LifeWire provides original and syndicated lifestyle content to Web publishers. Diane Mapes is the author of "How to Date in a Post-Dating World" and writes a column, Single Shot, for the "Seattle Post-Intelligencer."