Mom says missing daughter had been excited about concert

(CNN) -- The mother of a Virginia Tech junior who disappeared Saturday night during a Metallica concert says she helped her daughter choose an outfit for the show that same morning. 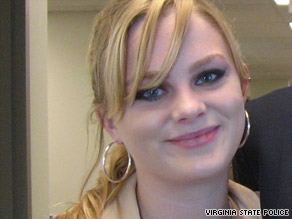 Morgan Harrington, a 20-year-old education major, went to the concert at the University of Virginia's John Paul Jones Arena in Charlottesville with several girlfriends but disappeared from their sight around 8:40 p.m., according to police, who are calling it a missing person case.

"She was excited about the concert and she brought home three outfits that she tried on for me," Gil Harrington, said Tuesday on HLN's "Nancy Grace."

"We chose one and she said, 'Mama, it is a rock concert so it is probably not what you would choose, but is this one OK?'" Harrington said she told her daughter, 'That will do fine.' "You know you have to give your kid wings," Harrington said.

Morgan Harrington had been so excited about the concert, according to her mother, that she posted the tickets on the refrigerator six months ahead of time.

Metallica posted a message about Harrington's disappearance on their Web site under the heading "One of our fans is missing."

"We are deeply concerned about the disappearance of 20-year-old Virginia Tech student Morgan Dana Harrington, who was last seen while attending our concert at the John Paul Jones Arena in Charlottesville, VA, on Saturday night," the message said.

The message described Harrington and asked that anyone with information contact Virginia State Police or University of Virginia police.

"Our thoughts are with Morgan and her family for her safe return," the message concluded."

Harrington, who lives off-campus, was reported missing Sunday afternoon when she did not show up at her parents' home to study for a math exam with her father.

"It's important to us as police officers to realize that people do come up missing," said Lieutenant Joe Rader of the Virginia State Police in a news conference on Monday.

"However, it's very, very unusual that we have not heard anything, either, from her friends or from her family regarding her whereabouts. That is the biggest concern currently -- her whereabouts and her welfare."

All About Metallica • Virginia State Police