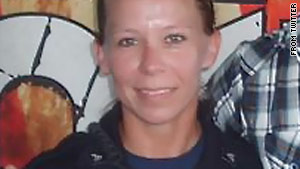 Kimberly Munley, here in an image from Twitter, is a civilian police officer credited with stopping the gunman.

Fort Hood, Texas (CNN) -- The police officer who ended the Fort Hood massacre by shooting the suspect is known as the enforcer on her street, a "tough woman" who patrolled her neighborhood and once stopped burglars at her house.

"If you come in, I'm going to shoot," Kimberly Munley told the would-be intruders last year.

It was Munley who arrived quickly Thursday at the scene of the worst massacre at an Army base in U.S. history, where 13 people were killed. She confronted the alleged gunman, Maj. Nidal Malik Hasan, and shot him four times. Munley was wounded in the exchange.

"I just felt more protected knowing she was on my street," neighbor Erin Houston said.

Munley, the mother of a 3-year-old girl, lives on a street where a lot of homes are vacant because so many residents are deployed at war in Iraq and Afghanistan.

"We sleep a lot safer knowing she's on the block," said Sgt. William Barbrow, another neighbor.

When Bryan Munley heard that his sister-in-law thwarted the alleged gunman in a shootout, he wasn't surprised.

"There's nothing that stands in her way. It completely makes sense that she did what she did," he said from Downingtown, Pennsylvania. "It was amazing. Without her, there would have been a lot more people killed."

He added, "She is definitely a tough woman."

Munley, 34, is being treated for her wounds. Her father, former Carolina Beach, North Carolina, Mayor Dennis Barbour, said his daughter is doing well.

"Her efforts were superb," said Col. Steven Braverman, the base hospital commander.

"Really a pretty amazing and aggressive performance by this police officer," he said.

Cone said Munley and her partner responded "very quickly" to the scene -- reportedly in about three minutes.

On social networking sites, she was lauded for her actions. One Facebook fan page was called "Sgt. Kimberly Munley: A Real American Hero" and had more than 1,400 members.

"My prayers for a fast recovery as well as my sincere thanks of an outstanding job," one person wrote. One woman added, "U got some brass balls, girl ... u r my hero!!!!"

Authorities say Hasan, an Army psychiatrist, opened fire at a military processing center at Fort Hood on Thursday, killing 13 and wounding 30 others.

Cone was asked on CNN's "American Morning" whether Munley's shots brought down the assailant and stopped him from shooting.

"That's correct," Cone said. "The critical factor here was her quick response to the situation."

Bryan Munley said Munley is married to his brother, Staff Sgt. Matthew Munley. He said Matthew was in Downingtown, outside Philadelphia, visiting his family when the shootings happened. The couple, married since 2006, have a 3-year-old daughter named Jayden.

She is definitely a tough woman.
--Bryan Munley
RELATED TOPICS

Matthew was at Fort Bragg on Friday, trying to get a flight to Texas to see his wife.

Its bio blurb has particular resonance in the aftermath of the incident.

"I live a good life....a hard one, but I go to sleep peacefully @ night knowing that I may have made a difference in someone's life."