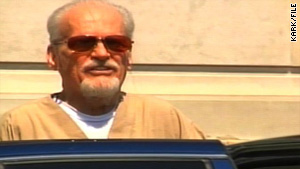 Tony Alamo has said, " I love children. I don't abuse them. Never have. Never will."
STORY HIGHLIGHTS
RELATED TOPICS

(CNN) -- Evangelist Tony Alamo is likely to spend the rest of his life in prison after an Arkansas judge sentenced him to 175 years Friday on charges that included taking minors across state lines for sex, according to prosecutors.

A jury convicted Alamo in July on 10 federal counts covering offenses that spanned 11 years and dated back to 1994, according to documents from the U.S. District Court for the Western District of Arkansas.

Alamo, the 75-year-old founder and leader of Tony Alamo Christian Ministries, will serve the sentences on each count consecutively, for a total of 175 years in prison, prosecutors said.

In addition to his sentence, Alamo was fined $250,000, court documents showed.

His lawyer filed an appeal Friday.

"Given the number of victims and the difficult type of testimony they had to provide in order to get to trial, it's gratifying for them to see him get this sentence," he said. "Not only did they entrust their lives to him, he did it in the name of God. And he betrayed their trust."

Authorities in September 2008 arrested Alamo, whose real name is Bernie Hoffman, and raided his 15-acre compound near Texarkana, Arkansas.

An indictment released in November 2008 accused Alamo of transporting five girls across state lines for sex. The criminal complaint included accounts from three girls, two of whom were 17 when the complaint was released last year, and one who was 14.

In a phone interview last year with CNN, Alamo called the accusations a hoax.

"They're just trying to make our church look evil ... by saying I'm a pornographer. Saying that I rape little children. ... I love children. I don't abuse them. Never have. Never will."