Women: Saviors of the world economy? 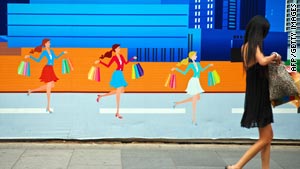 A shopper exiting a mall in China, where females under 35 are boosting domestic consumption.

(CNN) -- The largest growing economic force in the world isn't the China or India -- it's women.

The earning power of women globally is expected to reach $18 trillion by 2014 -- a $5 trillion rise for current income, according to World Bank estimates. That is more than twice the estimated 2014 GDP of China and India combined.

For companies, the growing economic power of women would seem an obvious market to capture. But according to a global study by the Boston Consulting Group, women feel at best underserved by companies, and at worst ignored.

"The current way companies appeal to women is to take a male product and paint it pink," said Michael Silverstein, a partner at BCG and coauthor of "Women Want More," a book based on the study results.

He points to Dell Computers ill-fated "Della" Web site launched in May. Aimed at generating more interest with female consumers, "Della" was dropped after a backlash of criticism that the site was patronizing (example from an article on the site: "You'll find netbooks can do a lot more than check your e-mail.")

"Women found it insulting," he said.

For women, the worst offender is the financial services industry. The BCG survey of 12,000 women in 40 regions around the world found that financial services -- such as providing ibanking, investment and insurance products and advice -- are worst at connecting with female consumers.

In doing so, the industries risk alienating the greatest growing spending bloc on the planet, Silverstein argues. Whether in the workforce or not, women are increasingly the drivers of consumer spending. Women globally control $20 trillion in annual consumer spending; by 2014 that could climb to $28 trillion.

The current way companies appeal to women is to take a male product and paint it pink.
--Michael Silverstein, a partner at BCG

The economic story of burgeoning economies such as China is also the story of "factory girls," young women who have found new spending power as a result of new economic opportunities. Despite the financial crisis, domestic spending in the first nine months of this year was up 15 percent, driven in large part by women under the age of 35, said Shaun Rein, managing director of China Market Research Group.

"Women are starting to make as much, if not more, than men, especially in third and fourth-tier cities," Rein said.

That is not to say women have reached workplace parity in the U.S. -- women still earn only 77 cents for every dollar men do. And the ranks of female CEOs are still thin. "Most of the big companies are worked by men, for men," Silverstein said. "Only 38 or so of the top 400 companies are run by women."

He recalls a meeting with the head of a large U.S. bank and the female head of investment banking. "He was your classic bankers, in his 50s, being very dismissive of the ideas (of capturing female consumers)," Silverstein said. "She was practically banging her fists on the table. Afterward he said, 'Back off baby, there are bigger fish to fry'."

The trouble for women -- be they working women seeking small loans or entrepreneurs trying to attract venture capital -- is a problem of access and information, said Teri Cavanaugh, head of strategy for the Global Banking Alliance for Women.

"Men in business have mentors; women don't," she said. "Women really want to have relationships with their bank, information and advice ... but banks are not geared that way."

While women in developed markets bemoan disconnect with financial services, in the developing world financial programs aimed to lift families out of poverty are focused on women. Microfinancing gives small, short-term loans almost exclusively to women, because studies show women are most likely to invest in the welfare of the family and -- importantly -- pay loans back on time.

"One of the most difficult things about being poor is that your income is lumpy," says Sarah Mavrinac, a former INSEAD finance professor and president of Aidha, a Singapore group that aids immigrant workers. "It's $10 one day and then nothing for a while. Microfinance helps ensure that food still appears on the table for the children when income dries up periodically."

Even immigrant workers who have a steady income have trouble getting help from banks. When Mavrinac approached banks to encourage savings accounts aimed at migrant workers, the banks weren't interested. "They aren't interested in short-term savings or high transaction accounts," she said.

Last year, cash remittances to home countries from migrant workers was more than $300 billion, according to the World Bank. And even though they make on average less than men, the majority of the cash was from female workers. "Banks are clearly missing out here," Mavrinac said.