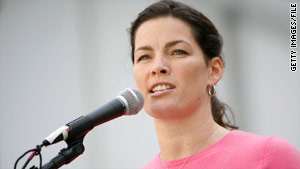 Skater Nancy Kerrigan is remembered for surviving an attack before the 1994 Olympic Games.
STORY HIGHLIGHTS

(CNN) -- The medical examiner has ruled that the death of Daniel Kerrigan, the father of figure skater Nancy Kerrigan, was a homicide, the Middlesex County district attorney's office said Tuesday.

The skater's brother, Mark, was arraigned in January on assault and battery charges in an incident involving his father, but the district attorney's office would not say if other charges might be filed against the younger Kerrigan in light of the medical examiner's finding.

Daniel Kerrigan, 70, died January 24 after an alleged altercation with his son at the Kerrigan home in Stoneham, Massachusetts.

The Kerrigan family released a statement through their attorney expressing disappointment "that the medical examiner would release a cause of death without having all of the relevant facts. We believe this finding to be premature and inaccurate."

"The Kerrigan family does not blame anyone for the unfortunate death of Dan Kerrigan, who had a pre-existing heart condition," said the family statement, released by attorney Tracy Miner.

Mark Kerrigan, 45, pleaded not guilty to the charges against him January 26. Through his attorney, he denied any responsibility in his father's death.

According to Middlesex County Assistant District Attorney Elizabeth Keeley, police responded to a 911 call at approximately 1:30 a.m. January 24 from Brenda Kerrigan, wife of Daniel and mother to Mark and Nancy Kerrigan.

Keeley told District Court Judge Mark Sullivan during the arraignment for Mark Kerrigan that there was a violent argument and struggle between the father and his son, resulting in the elder Kerrigan falling or collapsing on the kitchen floor. Keeley said Mark Kerrigan told authorities "that he did in fact have an argument with his father, the argument became physical, he grabbed his father around the neck, and at some point the father collapsed to the floor."

According to Keeley, police found Mark Kerrigan in the basement of the house, "clearly intoxicated" and "extremely combative." He refused to comply with police officers, said Keeley, and they had to subdue him with pepper spray before forcibly removing him from the home.

Mark Kerrigan's attorney, Denise Moore, said in court that Kerrigan was unemployed, was recently released from a correctional facility and was living at home with his parents. He is taking medications and seeking psychological help for post-traumatic stress, apparently from his time in the Army, she added.

Despite appeals from his attorney, the judge ordered Kerrigan held on $10,000 cash bail. His next court appearance is expected to be February 24.

Nancy Kerrigan first gained prominence by winning a bronze medal at the 1992 Winter Olympics in Albertville, France. In 1994 she earned a silver medal in Lillehammer, Norway. But she is perhaps best remembered for being injured in an attack before the 1994 Winter Games by skating rival Tonya Harding's ex-husband and an accomplice.