Officials: Arizona fugitives probably not in Arkansas after all 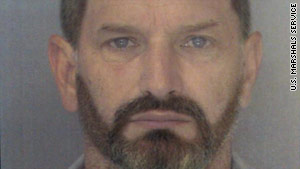 John Charles McCluskey may have dark hair and a beard, as in this U.S. Marshals Service photo composite.

(CNN) -- Law enforcement officers in Arkansas on Wednesday night were conducting a manhunt for a pair of suspected robbers who they now believe are likely not fugitives from Arizona.

Earlier Wednesday, a U.S. Marshals source said John McCluskey, who escaped from an Arizona prison late last month, and his alleged accomplice, Casslyn Welch, were possibly seen in Gentry, Arkansas, and might have been involved in the robbery of a beauty store.

The descriptions of the store robbers and the fugitives "don't match," the Benton County Sheriff's Office said Wednesday night.

Supervising Deputy Marshal Rich Tracy of the U.S. Marshals in Arizona said the agency was still trying to determine whether the pair are from Arizona.

The suspects in the robbery of the beauty store got away on foot, the source said.

Joyce Cook, the owner of Kut and Kurl, told CNN affiliate KNWA that she doesn't believe the robbers were the fugitives.

"The guy kept telling me he was sorry but needed the money," said Cook, who had seen artist renderings of how McCluskey and Welch may now appear.

Fugitive couple on the run

Video: Hunting down an escaped convict

"We're leaning toward more that it is not them [the fugitives] than it is," Benton County Sheriff's Office spokesman Doug Gay told CNN.

He said Cook's description matches that of a man and woman seen walking on a road between Gentry and Siloam Springs, Arkansas later Wednesday. A passer-by thought it suspicious that a man was wearing a hoodie when it was 100 degrees.

Regardless of their identity, Gay said, law enforcement agencies were working through the night to find the man and woman.

"It's an aggressive pair willing to commit a violent crime in the middle of the day."

The two fugitives on the run from Arizona have changed their appearance in recent days, according to the U.S. Marshals office.

McCluskey is now believed to have black hair and a black beard, while Welch has dyed her hair blond, according to a bulletin from the marshals' office Wednesday. New photo composites are being prepared to help in the search, it said.

Welch's mother lives in Arkansas, said Thomas Henman, supervisory deputy U.S. Marshal in Arizona. The fugitives are first cousins and in a relationship.

"Both of these individuals have been extremely unpredictable," said Henman. "They are contacting the public as little as possible."

Earlier Wednesday, marshals said the search for the couple was focused on western Montana and southwest Canada.

Officers at the Montana ports of entry, border patrol agents and their air and marine division were participating in the investigation in cooperation with other federal, state, local, tribal and Canadian authorities, said Mike Milne, spokesman for the U.S. Border Patrol division that handles Montana.

The border patrol has stepped up its efforts, and authorities are scrutinizing ports of entry to identify any convicts attempting to leave the United State to enter Canada, Milne said.

In addition, Interpol, the world's largest international police organization, which facilitates cross-border police cooperation, is getting involved. At the request of the United States, Interpol has issued an international alert known as an "orange notice" for McCluskey and Welch.

An Interpol orange notice can be issued by its general secretariat for any act or event that poses a risk to public safety and security around the world, a news release from Interpol said Wednesday.

"The information included in the Interpol alert which has been sent to police around the world will significantly increase the chances that these two dangerous fugitives will be located and captured. Members of the public are urged not to approach them, but instead to immediately report any sightings to their local police," Interpol's executive director of police services, Jean-Michel Louboutin, said in a statement.

McCluskey and Welch left the Yellowstone National Park area last week, where they initially were hiding after McCluskey and two other men escaped July 30 from an Arizona prison, according to Fidencio Rivera, chief deputy U.S. Marshal for Arizona.

The other two men have since been captured.