Dirty campaigning? He perfected it.

Editor’s Note: Julian Zelizer is a professor of history and public affairs at Princeton University and a New America fellow. He is the author of “Jimmy Carter” and “The Fierce Urgency of Now: Lyndon Johnson, Congress, and the Battle for the Great Society.” The opinions expressed in this commentary are his. Go behind the scenes of the most dramatic elections on CNN’s “Race for the White House,” narrated by Kevin Spacey, Sundays at 9p.

Donald Trump has proved to be the master of political character assassination.

Over the past few months, he has managed to reduce his opponents to ugly caricature: Sen. Marco Rubio, once considered the rising superstar of the GOP, became “Little Marco,” a candidate without sufficient experience or gravitas to be president.

Sen. Ted Cruz, the darling of the right, has been tagged as “Lying Ted,” a Nixonian figure whose dirty tricks cast doubt on the legitimacy of his campaign.

He slammed Gov. Chris Christie – now out of the race and endorsing Trump – as a “loser,” “lowlife,” as well as a “sleazebag.”

And with Hillary Clinton, as Trump likes to remind the media, he hasn’t even gotten started yet.

The master of this style of politics was Lee Atwater, an aggressive, unpredictable political strategist who in 1988 managed Vice President George H.W. Bush’s devastating campaign against Michael Dukakis. The former frat boy from South Carolina had gained national attention when he ran Ronald Reagan’s 1980 campaign in South Carolina.

Once called the “Babe Ruth of negative politics,” Atwater’s signature style was to knock the knees out from right under a politician.

Everything about campaigns, in his mind, was about the spectacle and about feeding the crowds with grand narratives that depicted a world of stark choices between good and bad.

His candidates were good; the opponents were bad. There were no shades of gray.

He drew inspiration from his favorite form of entertainment: professional wrestling. Atwater liked to find the smallest issue with opponents and blow the facts up in their face.

“Republicans in the South could not win elections by talking about issues,” Atwater explained. “You had to make the case that the other guy, the other candidate, is a bad guy.”

Vice President Bush’s campaign team turned to Atwater in 1988. They wanted someone who could play hardball since they were far from certain of pulling off a victory.

Though Reagan had rebounded from a dismal year and was enjoying strong approval ratings, there were problems for his vice president.

Bush started campaigning under the shadow of the Iran-Contra scandal – a covert operation to use the money made from selling weapons to Iran to provide funds to the Nicaraguan Contras, despite a legislative prohibition from Congress.

Iran-Contra and other ethics problems, including a contracting scandal at the Pentagon, gave rise to concerns about a “sleaze factor” that could drag down the Republican ticket.

“Where was George?” Democrats asked about the vice president’s role in the scandal.

Many conservatives were also tired of the Reagan administration after feeling that he had sold out the right too many times (including with the deal with the Soviets).

Also, the record of vice presidents who followed their predecessors in office was weak. After John Adams, Thomas Jefferson and Martin Van Buren, no other vice president won the election after his president ended his first or second term.

Those who took on the challenge after World War II – Richard Nixon in 1960 and Hubert Humphrey in 1968 – did not fare well.

Bush didn’t make Republicans feel very confident that they could beat the odds. He was not very comfortable on the campaign trail, and critics complained about what a Newsweek cover in 1987 had called the “wimp factor” to characterize his weak demeanor.

The Republicans faced 54-year-old Massachusetts Gov. Michael Dukakis. Though Dukakis was not nearly as exciting as Colorado Sen. Gary Hart, a Democrat whose presidential ambitions had been curtailed after a devastating sex scandal, he did enjoy a commanding lead over Bush in the spring of 1988. His immigrant background resonated with millions of Americans who came from similar circumstances.

As governor of Massachusetts, Dukakis proved his effectiveness as a skilled, technocratic manager of government. This experience offered a great talking point as Democrats were railing against Reagan, who seemed to have little control over his advisers and his administration.

In his speech accepting the Democratic nomination, Dukakis said that “This election is not about ideology, it’s about competence.”

He was liberal on most key issues that were necessary to win core Democratic votes, such as the death penalty, but centrist enough on matters like labor relations, economic regulations and bureaucratic reorganization to ward off simplistic right-wing attacks.

When the campaign began, Dukakis was boasting of the “Massachusetts Miracle,” the dramatic regeneration of the state’s moribund manufacturing economy that had taken place as a result of the recruitment of high-tech investments along the Route 128 corridor.

But after the Republican Convention, Atwater put together a campaign that gradually picked Dukakis apart, piece by piece.

The power of the negative ad

One of his main tactics was guilt by association. Atwater wanted to capitalize on an issue that had emerged involving Dukakis’ support of a weekend furlough program in Massachusetts that had allowed one prisoner named Willie Horton, who is African-American, to go free, after which he raped a white woman and stabbed her partner.

Atwater produced an advertisement, “Revolving Door,” that showed criminals walking in and out of prison as the narrator explained Dukakis’ liberal positions on issues like mandatory sentencing for drug dealers. 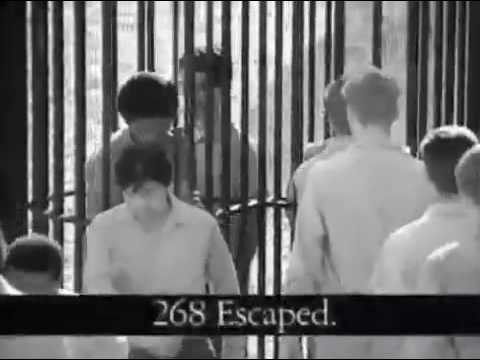 On the campaign trail, Bush warned that Dukakis was a “card-carrying member of the ACLU” who opposed prayer in school and supported leftist causes.

Atwater also brilliantly used ads and speeches to shrink the grandeur of the Democratic nominee. The Bush team used footage of Dukakis touring a defense equipment production facility in the fall, seeking to show his support for the military.

When the Republicans saw one of the images of the diminutive Dukakis popping out of an M1 Abrams Main Battle Tank with a helmet on, they almost popped the corks on the champagne. (Dukakis campaign manager John Sasso recalls members of the media breaking out into laughter when they first saw him.)

The Bush campaign ran an ad – which it put together the night of the event – showing video of Dukakis in the tank in order to question his position and commitment to defense. 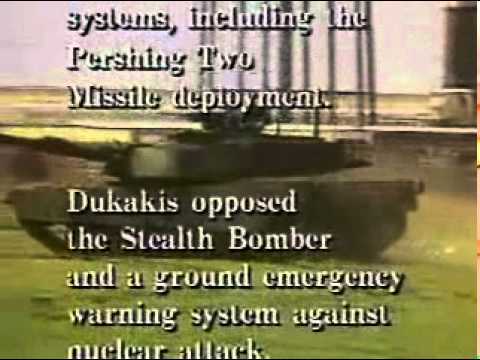 The ad read, “He opposed new aircraft carriers. He opposed anti-satellite weapons. He opposed four missile systems, including the Pershing II missile deployment. Dukakis opposed the stealth bomber, a ground emergency warning system against nuclear testing. He even criticized our rescue mission to Grenada and our strike on Libya. And now he wants to be our commander in chief. America can’t afford that risk.”

The vice president joked, “He thinks a naval exercise is something you find in Jane Fonda’s exercise books.”

They also ran ads highlighting the polluted Boston Harbor and problems in the state’s economy to take away Dukakis’ claim of having ushered an economic miracle into the moribund Bay State.

There were even rumors spread – though the Bush campaign denied being the source – about whether Dukakis was mentally stable.

When their opponent made any mistake, Atwater’s team immediately mobilized to use it in devastating fashion. When CNN anchor Bernard Shaw asked Dukakis if he would support the death penalty if his wife were murdered, Dukakis only offered a cold and detached response: “No I don’t, Bernard, and I think you know that I’ve opposed the death penalty during all of my life.”

The Dukakis team understood this was a major gaffe. Atwater saw a commercial.

Atwater understood that good old-fashioned patriotism played well. He understood that the candidate could win over voters with bombastic and eye-catching jingoistic patriotic sentiment that riled up the crowds. And this became a central part of the campaign.

Even though the Cold War was starting to draw down, with Reagan negotiating a peace with the Soviet Union, Vice President Bush acted like it was the late 1940s. Atwater understood that pacifism didn’t sell on the campaign trail.

Atwater knew exactly what he was doing. The Bush campaign reduced Dukakis to a left-of-center, ineffective and virtually unpatriotic Democrat.

Their campaign alone was not the only reason Bush won. But it certainly helped.

How low will they go?

In 1991 – as he was dying from a brain tumor – Atwater apologized to Dukakis for the “naked cruelty” he displayed in the 1988 campaign.

He admitted that, “While I didn’t invent negative politics, I am one of its most ardent practitioners.”

In 2016, we see some of the legacy from Lee Atwater in 1988 continue to play out on the campaign trail, with Donald Trump being one of its practitioners. (Trump even told CNN’s Jake Tapper that Atwater approached him in 1988 about whether he’d consider being Bush’s running mate.)

Trump: I think you'd have riots if I'm not the nominee

Trump has relied on a campaign style of character assassination and bombast. It’s been the essence of his campaign.

Also a fan of professional wrestling, he’s embraced the style of that support to his advantage.

Trump has been able to capitalize on the new social media, with its unfiltered outlets such as Twitter, to take these kinds of attacks to new levels. He has also capitalized on the sheer frustration that Americans have with the political system and the economy to get away with vicious attacks that in earlier periods might have caused candidates major problems.

Just as Atwater lowered the bar in 1988 to what was permissible in presidential campaigns.

Whether he wins or loses, Trump has lowered the standard once again as he has greatly accelerated the kinds of campaign assaults on character that will be deemed as acceptable in the future.