Exposed to hazardous conditions, toxins and at risk of nicotine poisoning

Thousands of children as young as eight are working in hazardous conditions on tobacco farms in Indonesia, putting them at risk of cancer, respiratory problems and nicotine poisoning, according to a new report by Human Rights Watch (HRW).

The report claims child tobacco workers are being exposed to nicotine, toxic chemicals and extreme heat throughout Indonesia, the world’s fifth-largest tobacco producer.

Tobacco fields no place for kids 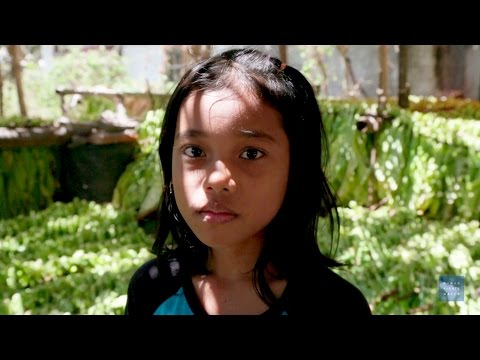 “Since I was a kid, I’ve been going to the fields. My parents plant tobacco. Mostly I help my parents and sometimes my neighbors. I have an older sister, an older brother, and two younger siblings. They help too,” she said.

In the report – based on interviews with 227 people, including 132 child tobacco workers, aged 8 to 17 – HRW calls on Indonesia’s government and tobacco companies to prohibit children from working with tobacco, and step up enforcement “to detect and eliminate hazardous child labor more broadly.”

Indonesia’s Ministry of Foreign Affairs declined to comment on the report. The Ministry of Manpower and Transmigration, which governs labor affairs, did not respond to CNN’s request for comment.

HRW urged tobacco companies to stamp out the use of child labor throughout their supply chains.

“Tobacco companies are making money off the backs and the health of Indonesian child workers,” said Margaret Wurth, children’s rights researcher at Human Rights Watch and co-author of the report.

According to Indonesian law, children under 18 are prohibited from doing hazardous work, including any in environments with harmful chemical substances.

According to the International Labor Organization (ILO), more than 1.5 million children aged 10 to 17 work in agriculture in Indonesia. It’s not clear how many are working within the tobacco industry.

While HRW says the government has a “strong legal and policy framework on child labor,” it points out that the current list of hazardous occupations prohibited for children “does not specifically ban work handling tobacco.”

Tobacco producers in Zimbabwe are banking on growth

According to the U.S. National Institute for Occupational Safety and Health, tobacco workers are at “especially high risk” of developing nicotine poisoning or “green tobacco sickness” (GTS) from handling wet tobacco plants.

Symptoms include “nausea, vomiting, dizziness, and headaches,” all of which were also found by HRW in their interviews with more than 130 child workers in Indonesia.

According to the U.S. Department of Labor, “children and adolescents may be more sensitive to chemical exposures, more likely to suffer from GTS, and may suffer more serious health effects than adults.”

Indonesia also has a major problem with child smoking. According to the country’s Health Ministry, more than 3.9 million children aged between 10 and 14 become smokers every year.

As well as government action, the report also highlights the responsibility of tobacco producers in Indonesia, including some of the world’s largest multinationals and their subsidiaries, to reduce the involvement of children in their supply chains and improve worker safety and protections.

While multinational producers – including British American Tobacco (BAT) and Philip Morris International (PMI) – were willing to share human rights policies and monitoring procedures with the report’s authors, no major Indonesian producers responded in detail to HRW’s findings, it said.

Those companies that did respond to HRW “have child labor policies that are largely aligned and appear consistent with international standards,” the report said.

Several multinationals, including Philip Morris, BAT and Alliance One International, said they had engaged in efforts to reduce child labor, including education and worker safety programs.

In a statement, Philip Morris said it welcomed the report “which sheds light on children exposed to hazardous work in tobacco-growing, mainly on smallholder family farms in Indonesia.”