Paid leave reality check: What are the chances of a national law?

Editor’s Note: Kelly Wallace is CNN’s digital correspondent and editor-at-large covering family, career and life. Read her other columns and follow her reports at CNN Parents and on Twitter @kellywallacetv.

For the first time in a presidential campaign, both the Democratic and Republican nominees have put forward plans calling for mandated paid leave.

While Donald Trump’s proposal covers only mothers and is not as expansive as Hillary Clinton’s plan, it still represents the first time a Republican presidential nominee has spoken out in favor of paid leave, something that only Democratic presidential nominees have done in recent years.

The United States is the only industrialized nation that does not mandate leave for women after they give birth, and it seems the American public has had enough of that designation. One poll this year found that three out of four Americans support a law calling for 12 weeks of paid family and medical leave for workers.

With the majority of the public behind the concept, what are the chances it will happen?

I posed that question during a recent panel I moderated on paid parental leave at the 2016 Concordia Summit. The summit is sponsored by Concordia, a nonprofit organization bringing together public and private sector leaders to collaborate on solutions to some of the biggest problems impacting our world. 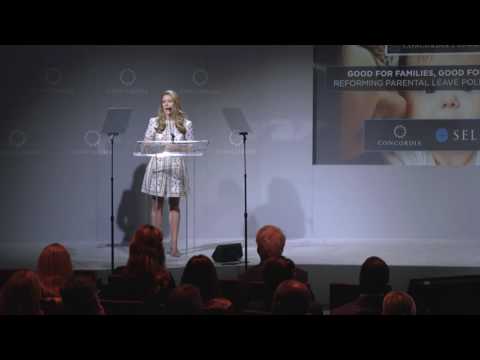 Rep. Kathleen Rice, a Democrat from New York who was elected to her first term in 2015, said she couldn’t imagine this issue getting “walked back” when there is such public support for it.

“The big obstacle is the hyperpartisan situation that we have in Washington,” said Rice, who provides 16 weeks of paid leave for her staff. “My hope is that after this presidential election, the fact that we have had this kind of presidential election in our lifetime will be a wake-up call to me and my colleagues to actually put aside all of our ideological intransigence and actually try to get something done.”

The private sector leading the way

Getting members of Congress to hear the first-hand accounts from businesses that have decided to provide paid leave to their employees and continue to be successful would definitely help, said Rice.

“We should be looking to our partners in the private sector, watching how they do it and (how) they’re still profitable,” she said.

The panel included representatives from Etsy, Foursquare and Hilton, which all started offering generous paid leave policies this year: Etsy provides 26 weeks of fully paid leave to both female and male employees who become parents through birth or adoption; Foursquare offers 12 weeks of fully paid leave for primary caregivers, who assume the principal role of providing care after birth or adoption, and eight weeks for secondary caregivers; and Hilton offers 10 weeks of full pay for birth mothers and two weeks fully paid for all new parents, including fathers and adoptive parents.

Executives from Etsy, Hilton and Foursquare along with Rep. Kathleen Rice (D-NY) speak at a panel on paid parental leave.
Ben Hider/Getty Images

“As we launched, we had a lot of our peers and competitors and other folks in the service industry ask us, ‘Well, how could you do it? How can you afford this?’ ” said Laura Fuentes, senior vice president of talent, rewards and people analytics for Hilton Worldwide.

More than 500 hundred people are either currently on leave or have already used the new policy at Hilton, said Fuentes. “It doesn’t break the bank. It doesn’t drive you into bankruptcy, and in fact, I hope that over time, we’ll also be able to demonstrate the retention and engagement play,” she said.

The benefits of paid leave for children are real, majority of research says

The more companies that offer paid leave and the more they see the economic benefits from retention, the more pressure there will be on the government to actually roll out a mandatory nationwide policy, said Nitzia Logothetis, founder and interim CEO of the Seleni Institute, a nonprofit organization dedicated to serving the reproductive and maternal mental health care needs of women. Seleni helped program and co-hosted the panel on paid leave at the Concordia Summit.

“To train somebody from scratch would cost a lot more money than potentially to give someone a paid leave and then have them come back when they’ve been with you for many years. So investing in people is a huge, huge part of it,” Logothetis said. “I think when we can make the link between the economic benefit of actually going back, things will begin to change.”

Heather Jassy, senior vice president of values-aligned business for Etsy, said the way forward for wider acceptance and implementation of paid parental leave policies is “getting past the notion that business can’t be successful and be good, and care about employees. … A lot of this comes down to ‘short-terminism’ in thinking.”

A year of paid parental leave: Vital but how likely?

At Etsy, she said, the conversation leading up to its generous paid leave plans for women and men came down to whether the company was going to be more focused on short-term success versus long-term investment in its business.

“Do we think about the next quarter or … how much we’re going to grind out of our employees over the next three months, or do we think about investing in people over the very long-term?” Jassy asked. “So I think it’s about changing the conversation that’s happening in business to something that’s much longer-term and creating something that’s a benefit for all of us.”

How do we pay for it?

Perhaps the biggest obstacle to a national paid leave plan is the question of how we are going to pay for it.

Clinton says she would finance her paid leave proposal – which would provide 12 weeks of partially paid leave to women and men to care for a child or a sick family member – by increasing taxes on the wealthiest Americans. Trump says he would pay for his plan – six weeks of partially paid maternity leave for mothers only (he doesn’t offer any paid leave for fathers) – by eliminating the fraud in the unemployment insurance system. The campaign says Trump’s plan would cost about $2.5 billion per year and estimates the fraud in the unemployment system at roughly $3.4 billion.

In California, the first state to require paid leave for its workers, the program is financed through mandatory contributions by workers to the State’s Disability Insurance program, which covers disability and paid family leave insurance coverage.

Why is the maternal mortality rate going up in the United States?

In New York, under its paid leave plan (PDF), which will go into effect in 2018, there will be an employee contribution but the state has not yet set that rate.

“There’s always the question of how you pay for it?” said Rice, a former district attorney and federal prosecutor. “That can be subject to debate, but my argument to my colleagues when we talk about this is, we can’t afford not to do this, because you have to take the long view, not the short view.”

The power of millennials

Rice encouraged all Americans concerned about paid leave to make their voices heard in Washington to get a national paid leave law. In conversations with the leaders of Etsy, Hilton and Foursquare, it seems millennials are already speaking up and bringing about change in their companies.

The path to happiness for millennial men is ... kids

“The millennial generation that makes up a lot of our workers has different expectations about how work and private life are balanced, and so they’re demanding” paid leave, said Jeff Glueck, chief executive officer of Foursquare. “I think the political scene (hasn’t) caught up with that yet, but I think there’s a lot more consciousness about how work is important and it’s critical, and we’re doing great work, but we also need lives, and so I think the millennial generation and therefore the tech generation are really driving a lot of this conversation.”

Fuentes said that Hilton surveys its 150,000 employees every year and that while the feedback from millennials is similar to other generations when it comes to benefits and other issues, the millennials are “louder” about it. When they look at the comments, 90% tend to be from millennials, she said.

“Millennials are leaning in and giving us more insight, giving us better examples and that’s really what helped us carve some of these policies,” said Fuentes.

This year, New York became the fourth state in the country, joining California, Rhode Island and New Jersey, in requiring paid leave for its workers. San Francisco also became the first city in the country to back fully paid leave for employees, giving city residents more leave than under the state law, which offers six weeks with 55% of the worker’s salary covered.

Twenty-one additional states plus the District of Columbia are in some stage of exploring paid leave, including having a bill introduced or a task force actively working on the issue, according to Family Values @ Work, a network of coalitions in 24 states working to enact paid sick leave and paid family leave policies.

Will it take more action on the state level before we eventually see a federal law?

“If you look just from a historical perspective, that’s how change is usually brought,” Rice said, comparing the efforts to the movement in states to support full equality for the LGBT community before action on the federal level.

“I think like everything, progress is very slow, but sometimes it’s very fast, and it takes all these different elements … to put their little grain of sand, and then eventually it’s a tipping point where there’s no choice in a sense because the culture has changed,” said Logothetis, of the Seleni Institute.

Moms who need mental health care the most aren't getting it

As more states consider paid leave policies and as the next president may try to make paid leave a federal law, there needs to be more thought given to how the growing number of independent workers would be covered, some business executives say.

“More and more workers fall into this gray zone where they are Etsy sellers or they’re Aibrnb hosts or they’re Uber drivers … something between a contractor and a full-time employee,” said Glueck, of Foursquare. “You don’t want to create policies that just deter full-time employment,” he said.

At Etsy, the company is concerned about the 1.7 million business owners in America, almost 90% of whom are women, who are Etsy sellers and fall outside the traditional employee-employer relationship.

“We’re thinking about portable benefits packages and things that would be of assistance to those workers as well, so that they could also step away,” Jassy said. “There’s a tremendous opportunity to really create a culture of innovation in our country by providing those sorts of safety nets for those workers as well.”

What do you think are the chances of a national paid leave law? Share your thoughts with Kelly Wallace on Twitter @kellywallacetv.