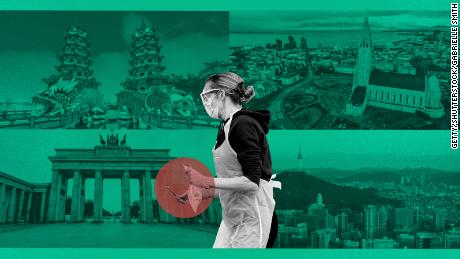 As governments fumbled their coronavirus response, these four got it right. Here's how.

London (CNN)Like a line of dominoes, country after country has been shut down by the novel coronavirus. Despite signs the threat was making its way across the globe, there was a clear pattern of response in many parts of the world -- denial, fumbling and, eventually, lockdown.

In our globalized world, it's puzzling that so few lessons were learned in the early weeks of each country's outbreak, when the chances of containing and stopping the virus were highest. Now the focus is on flattening the curve, or slowing the virus' spread, to keep death tolls from climbing further.
As much of the world mulls gradually lifting lockdowns, there are still lessons to be learned from these four places that got it right. Here are 12 of those lessons.

Sitting just 180 kilometers (110 miles) off the coast of mainland China, Taiwan's outbreak could have been disastrous. At the end of January, the island was estimated to have had the second-highest number of cases in the world, according to Johns Hopkins University (JHU).
Read More
But Taiwan, with a population of around 24 million people, has recorded just over 390 cases and six deaths, and yesterday, it reported no new cases at all. It's managed to do that without implementing severe restrictions, like lockdowns, or prolonged school and nursery closures.
In terms of its death toll, at least, Taiwan doesn't even have much of a curve to flatten, more of a line with a couple of rigid steps.
<div class="zn-body__paragraph" data-paragraph-id="paragraph_FA306F5B-588D-613C-292B-79