No smartphone is perfect, and with a mid-range smartphone, you’re expecting compromises. The $399 iPhone SE doesn’t have Face ID and can’t handle Portrait Mode when taking pictures of your pup. The $399 Galaxy A51 turned out to be a mixed bag with performance. And TCL’s $449 10 Pro wasn’t great with photography, but had a solid display.

And with the $250 TCL 10L, you’ll also want to temper expectations.

Mid-range smartphones aim to hit the sweet spot when it comes to value and features. Yes, they should handle communications, texts, web browsing, streaming and take decent photos. But what is the special sauce that TCL uses to make the 10L stick out among mid-range smartphones?

We’ve spent over a week with it, and while it’s not perfect, it’s not the worst. Let’s get into the specifics.

A smooth and colorful device

The TCL 10L feels substantial in the hand despite it weighing less than a pound. It’s a mostly plastic build and the back has a smooth finish.

The camera bump, which houses four cameras and two LED flashes, sticks out just a hair. We liked how on the 10 Pro it was mostly flat, but there isn’t much of a wobble here as it spans most of the back. We like that TCL focused on ergonomics. The left and right sides on the back slightly curve up, which makes it easy to grab. It’s also tall, with a 19:5:9 ratio.

While the backside is smooth and glossy, it doesn’t get so loose in your hand that it might fall out. The rear side also contains a physical fingerprint sensor that brings us back to older LG smartphones and the Pixel series from Google. It might be high for people with smaller hands, but it was easy enough to find and make contact for us. In terms of ports, there’s a USB Type-C on the bottom and a headphone jack. The right side features a volume rocker and a power button. The left side has a combo microSIM and microSD card slot, along with a customizable key.

The front features a pinhole display that’s home to a 16-megapixel camera in the top left corner. There are slim bezels around the top and the left and right sides. The bottom, however, has a thicker bezel, which gives you a spot to hold the device.

The 10L’s display impresses. The 6.53-inch LCD panel isn’t the sharpest or brightest we’ve used, but it delivers big value for the price. It’s still full HD+ and TCL’s proprietary NXTVISION is on board, which aims to enhance the display quality.

The result? Well, it turns up the saturation and brightness of whatever you’re looking at. If you enjoy the extra hit of vibrancy, colors will come through quite bright in all cases. But it removes the realism with some content. We didn’t notice it as much on the 10 Pro, which features an AMOLED display, but that panel is higher quality and handles contrast a lot better.

The 10 L’s display does a good job with color reproduction, but we found that brightness could be low and it struggles in direct sunlight.

When streaming “Frozen II,” the contrast was less than what we hoped, specifically in the scene with Elsa over the sea in a storm, where there was less of a separation between brighter and darker tones. The brightness was strong here though, and we noticed that as a theme throughout the 10L. It was still immersive, but not nearly as immersive or enjoyable to watch as on the 10 Pro, iPhone SE or even Galaxy S20. NXTVISION didn’t ultimately have an enormous effect on the contrast either.

At $249.99, you might be surprised when you hear there are four cameras on the back. As we stated, these are in a horizontal format across the top. The main lens, a super wide, macro and depth sensor are held in place with LED flashes on either side. Essentially, the proverbial end caps.

The main lens is a 48-megapixel sensor that, by default, shoots photos in a 12-megapixel form. This is the same pixel binning technique we’ve seen on several phones this year (notably the TCL 10 Pro and Galaxy S20 series). It aims to deliver a photo with vibrancy and sharpness in smaller file sizes.

The main lens is a standard size and you can adjust the resolution in settings. Next up is an 8-megapixel super wide, which is excellent for capturing more in a shot. TCL opted for a 2-megapixel macro lens instead of a telephoto. With the macro lens, you can get detail up close, but you need to be quite close to the subject. Lastly, you get a 2-megapixel depth sensor that aids in Portrait Mode.

Before diving into image quality, we have a similar note to what we wrote in the TCL 10 Pro review: A watermark is applied to all photographs by default, but you can turn it off in the camera’s settings.

Most shots with the main lens shooting at 12-megapixel resulted in images that weren’t oversaturated (a break from the processing techniques on the TCL 10 Pro) and presented a pretty realistic view. Without crops and minus any zoom, photos look pretty detailed. It did a good job capturing the deep reddish-purple hues of the leaves on a Japanese maple, as well as the green grass and sky with clouds. But zooming in reveals some artifacts (unintentional blurring) with some of the leaves. The full 48-megapixel version of this shot came out a bit darker and offered the same amount of details when you crop in. 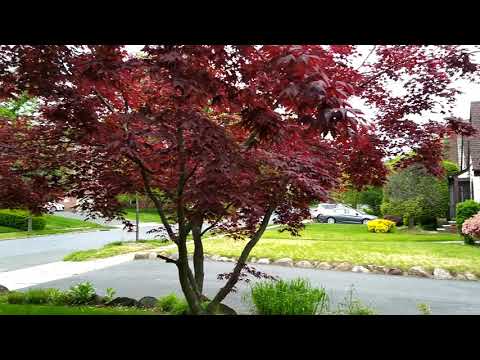 With the macro camera mode, you need to get close to the shot for it to focus, but even then, it might not. The device suggests a distance of 4 centimeters. Our up-close shot of an evergreen provided a neat angle, but the lens failed to focus on a bright flower on three separate tries.

One last note: while the ability to snap a shot took less than a second with the main lens, it wasn’t as quick with other modes. The macro shot and portrait mode functions took about two seconds to process.

Powering the TCL 10L is a Qualcomm Snapdragon 665 processor with 6GBs of RAM. It’s an ample amount of RAM for the 10L and, as a whole, it’s an efficient but not blazing fast setup. But echoing the thoughts behind a mid-range device, it’s not meant to go head to head with a flagship device (although the iPhone SE is an outlier with the speedy A13 Bionic).

It was a mixed experience with the TCL 10L for over a week. It handles social apps like TikTok, Instagram and Twitter with ease. Games like Real Racing, Idle Tycoons and Call of Duty Mobile showed long load times. Fortnite was playable, but with noticeable lag that made the matches even more difficult.

Navigating settings and selecting files also resulted in slow downs at times. But a few seconds later or even the next day, it was quick to handle those tasks. A number of factors could result in these speed bumps (background tasks and even open apps), but it was frustrating.

As we do with any Underscored review, we conducted benchmarks to set a standard to compare quantitative testing of multiple devices alongside our daily use, testing and perceptions. We used GeekBench 5, a benchmarking app that tests the devices by running intense processes that mimic real-life use cases. With GeekBench 5’s CPU test, the TCL 10L scored a 310 on single-core and 1,368 on multi-core. These are low and in-line with what we expected. The 10 Pro scored a 489 on single and a 1,550 on multi. Samsung’s Galaxy A51 got a 345 single and 1,301 on multi.

For the most part, without those speed bumps, the TCL 10L provided an experience akin to other mid-range smartphones. That’s pretty good, especially considering the price. And on the battery side, the non-removable lithium ion battery got us through a full day. In some cases, it was even two days.

TCL’s UI on top of Android 10 might look heavy but doesn’t weigh down the efficiency. There’s no wireless charging on the 10L, so you’ll need to plug it in to charge.

Like our benchmarking tests, we ran the TCL 10L through our standard battery test. We turned off connectivity on the device and charged the battery to 100%. We then play a video on a loop in the VLC app until the battery runs out. We had high hopes for the TCL 10L and it lasted 11 hours and 53 minutes.

TCL’s 10L is all about value with its $249.99 price point. It certainly brings something to the table, including a solid display. Battery life is really long and the UX doesn’t get in the way. You should be able to power through everyday tasks. And the camera is decent, so it’s possible to get a really nice shot, but it isn’t as simple as just hitting the shutter button like on an iPhone.

At $249.99, you’d be hard pressed to find a phone that performs this well, considering all of the above. Still, we’d recommend you spend more and opt for a 10 Pro, Galaxy A51 or even the iPhone SE. The latter still remains at the top of the mid-range list for us.

Note: The prices above reflect the retailer’s listed price at the time of publication.