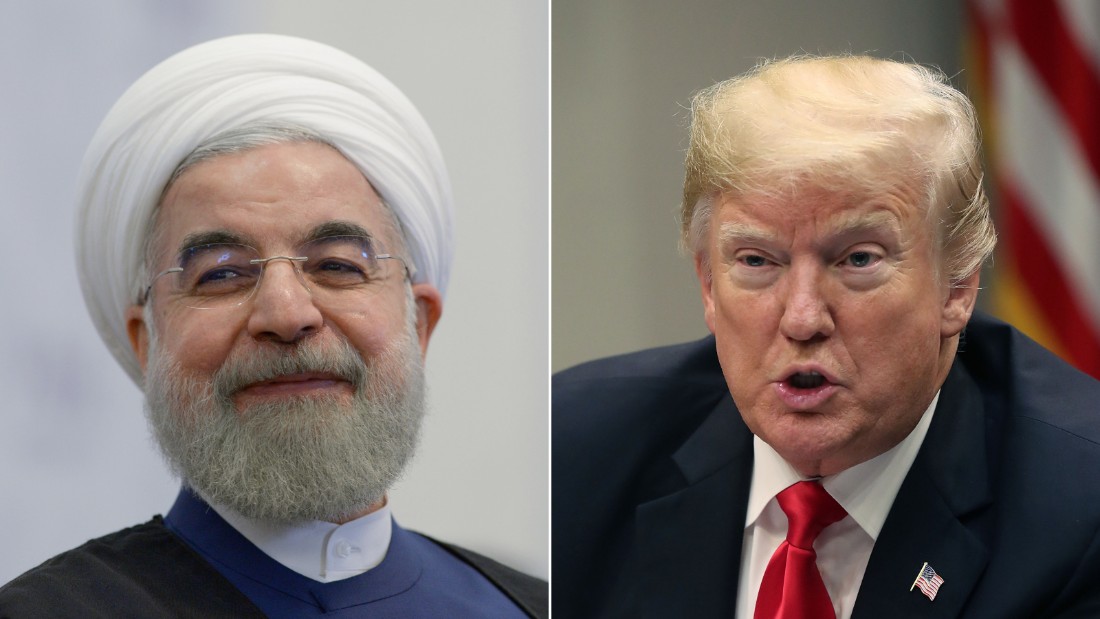 While Secretary of State Mike Pompeo has directly blamed Iran for the attack — which forced state-owned Saudi Aramco to halve its production — Trump has stopped short, saying he wanted to wait for a final intelligence report.

It wasn't clear if Trump's sanctions announcement signaled that report was completed or whether it determined Iran's culpability.

Here's what we know so far about the sanctions and attack:

"The secretary and the crown prince agreed that this was an unacceptable and unprecedented attack that not only threatened Saudi Arabian national security, but also endangered the lives of all the American citizens living and working in Saudi Arabia, as well as the world’s energy supply in general," the State Department said in a statement.

The pair also discussed "the need for the international community to come together to counter the continued threat of the Iranian regime," the statement said.

The meeting follows attacks made on the Saudi oil fields last weekend. Pompeo called the attacks an “act of war” earlier Wednesday but did not promise a military response, or provide intelligence that shows the attack was launched from inside Iran.

When Prince Khalid bin Salman, the Saudi deputy defense minister and former Saudi ambassador to the US, met with senior administration officials at the State Department, the Pentagon and the CIA in late August, he gave a clear message: don't start a military conflict with Iran.

The Saudis want the US to keep up the economic squeeze on Iran and are wary of any action that might start a conflict it could get dragged into, according to two sources familiar with the discussions.

That message has taken on new significance in light of Secretary of State Mike Pompeo's visit to Saudi Arabia this week to talk to the Saudis about a response to the attack on its oil refineries. President Trump wants the Saudis to take the lead in any response, since it was an attack on their soil.

There is widespread pressure coming from countries in the Middle East, who are in discussions with the Trump administration to mobilize an appropriate response to the oil field attack. But the US is getting different messages from those countries as to what should happen next and if military intervention is necessary.

"If there is not a response, why is the US in the Middle East?" said one diplomat from the region, adding that no one will take the US seriously if it does not respond to the attack beyond sanctions.

Pompeo called the attack on the Saudi oil fields last weekend an “act of war” but did not promise a military response, or detail any new intelligence that shows the attack was launched from inside Iran, when he landed in Saudi Arabia Wednesday.

President Trump said Wednesday that his administration would be announcing sanctions on Iran “over the next 48 hours.”

He also said that his “thinking pretty much remains the same” on the recent attack on Saudi Arabia.

Trump, speaking on a Los Angeles tarmac alongside his new national security adviser, Robert O’Brien, said the US is monitoring the situation in the Middle East closely, adding, “My thinking pretty much remains the same and we haven’t learned much that we didn’t know.”

What happened earlier Wednesday: Trump said he ordered new sanctions on Iran. It wasn't immediately clear to whom or which sectors the new sanctions would apply.

The US has ratcheted up sanctions on the country after withdrawing last year from a multi-nation nuclear deal that constrained Iran's nuclear activity in return for an easing of economic sanctions.

The US "maximum pressure" policy has undermined the nuclear deal, creating tensions with European allies who are trying to keep the nuclear deal afloat. The Trump administration has sanctioned all key Iranian economic sectors, including aviation and shipping. And in May, it hit the lifeblood of Tehran's economy, sanctioning its energy exports. 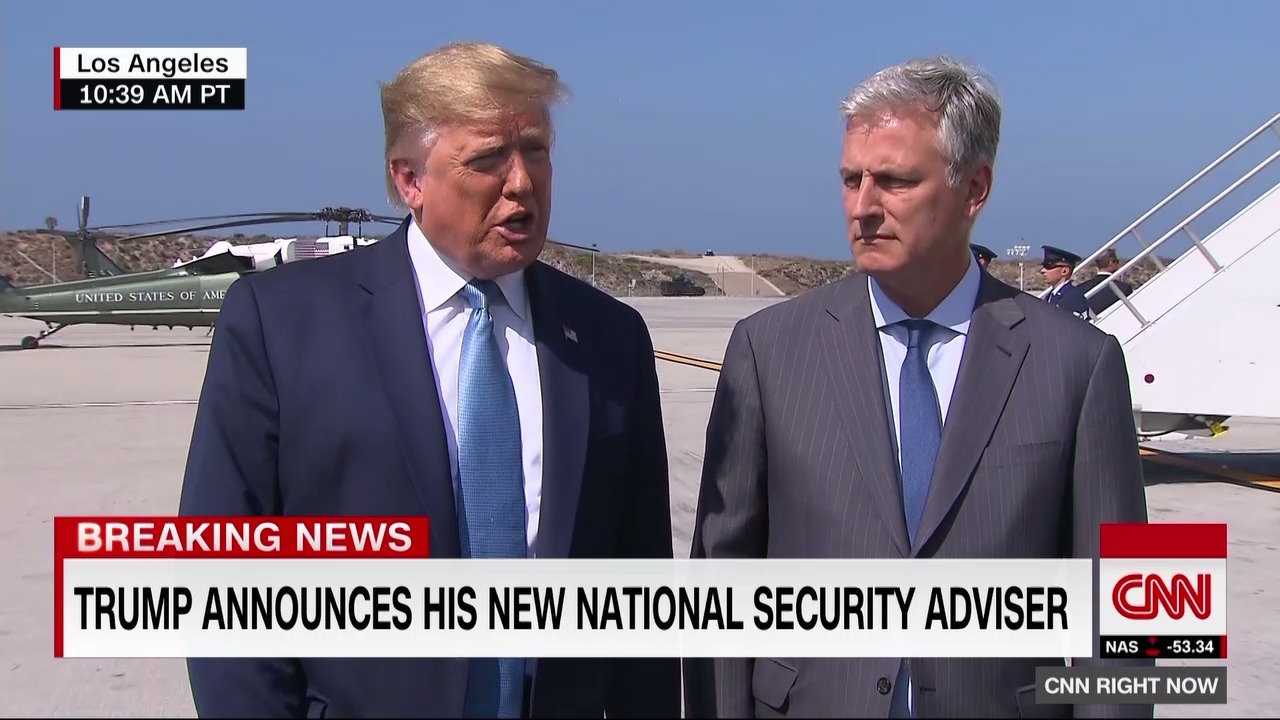 President Trump, answering questions about the Saudi oil attack, said he'll soon have an announcement, but did not provide further details.

Earlier today, Secretary of State Mike Pompeo called the strike “an Iranian attack” that was an “act of war." Trump said he has been in touch with Pompeo.

"He just came out with a statement. He spoke to me a little while ago and we’ll have an announcement," Trump said.

The President said the US will take action "if we have to."

Asked about the options he's considering, Trump said, "there are many options."

"There’s the ultimate option and there are options a lot less than that," Trump said. When asked what the "ultimate option" means, Trump said war — and added he's not considering that.

"I’m not talking about that ultimate option, no," he said.

Yemen’s Houthi rebels said they can produce more drones and threatened Saudi Arabia and the United Arab Emirates with more attacks on Wednesday.

"We will not hesitate to respond promptly and exceptionally to the countries of aggression, especially Saudi Arabia and the United Arab Emirates, if this aggression does not stop," Houthi military spokesperson Yahya Saree said in a statement released Wednesday.

“Our forces have reached a high level of efficiency and capability at all levels. Today our forces can manufacture and produce many drones in record time. The armed forces have already confirmed their ability to produce every day a drone,” Saree added.

Saree also made a direct threat to the UAE in the statement.

“Only one operation will cost you a lot. We announce for the first time that we have tens of targets in the UAE, including (targets) in Abu Dhabi and Dubai. They could be targeted at any minute,” the statement said.

What we know about Yemen's Houthi rebels: Houthi rebels said they're responsible for Saturday's attack on Saudi Arabian oil facilities, but a spokesperson for the Saudi-led coalition in Yemen said that Iranian weapons were used in the oil field attack. The spokesperson also said the strikes were not launched from Yemen, despite claims of responsibility by Houthi rebels.

The President made the announcement as some Republican lawmakers have called for military strikes against Iran and Vice President Mike Pence has suggested a military response is possible.

Secretary of State Mike Pompeo called the strike on Saudi oil facilities “an Iranian attack” that was an “act of war."

Pompeo stopped short of providing any details definitively showing the Iranians launched the attack from Iran.

"We were blessed that there were no Americans killed in this attack but any time you have an act of war of this nature, there’s always risk that that could happen,” he said. “This is an attack of a scale we’ve just not seen before,” he added later.

Pompeo, speaking to reporters off-camera before landing in Jeddah, said: "This was an Iranian attack. It’s not the case that you can subcontract out the devastation of 5% of the world’s global energy supply and think that you can absolve yourself from responsibility. Were it the case that the Houthis’ fraudulent claim was accurate, were that true — it’s not, but were that true, it doesn’t change the fingerprints of the Ayatollah as having put at risk the global energy supply."

Pompeo said the intelligence community has high confidence that the Houthis did not possess weapons systems like the ones used in the attacks. He said that they believe the attacks originated in Iran, not in Iraq.

"As for how we know, the equipment used is unknown to be in the Houthi arsenal,” he said. “These line attack cruise missiles we have never seen there and we think we’ve seen most everything. So the intelligence community has high confidence that these were not weapons that would have been in the possession of the Houthis. That’s probably the most important piece of information.”

“We also know that these are systems that the Iranians have not deployed anyplace else, that they have not deployed outside of their country to the best of our knowledge. We’ve not seen them deploy these types of UAV systems with the kinds of ranges and capabilities nor have we seen them place these missiles where they could have done it. We’ve seen no evidence that it came from Iraq. It could have well have traveled over Kuwait — we’ve not seen that,” Pompeo said.

He also called the Houthis liars and suggested they do not operate independently from Tehran.

“Whenever you report about them, and you say, ‘The Houthis said,’ you should say ‘The well known frequently lying Houthis have said the following.’ This is important because you ought not report them as if these truth-tellers, as if these are people who aren’t completely under the boot of the Iranians and who would not, at the direction of the Iranians, lay claim to attacks that they did not engage in. Which clearly was the case here,” Pompeo said. “So there you go, whenever you say Houthis, you should begin with, ‘the well-known, frequently known to lie Houthis,’ and then you can write whatever it is they say. And that’d be good reporting (laughter) and I know you care deeply about that good reporting.”

Secretary of State Mike Pompeo is in Jeddah, Saudi Arabia, where he will meet with Saudi Crown Prince Mohammed bin Salman.

What we know about his trip: The pair will discuss Saturday's attack on Saudi oil facilities and "coordinate efforts to counter Iranian aggression in the region," according to a State Department statement.