Dow rises ahead of jobs report

Let us catch you up:

President Trump said today he hasn't considered pardoning Paul Manafort, but did not rule out the possibility in the future.

"I have not even given it a thought as of this moment," Trump said when questioned about his pardon intentions for his former campaign chairman.

He continued: "It’s not something now that’s on my mind." Trump reiterated that he felt "badly" for his former aide. 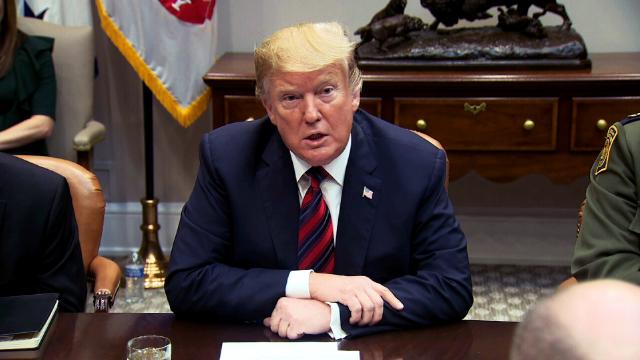 President Trump, speaking from the White House, said he feels "badly" for his former campaign chairman Paul Manafort, who was sentenced to additional prison time and charged with new crimes in New York today.

"I feel badly for him," Trump said, describing Manafort's legal troubles as a "very sad situation."

Without commenting directly on the new charges, Trump lamented his former aides situation.

He did not say whether he was considering a pardon for Manafort.

Downing said he is “disappointed” in the sentence.

“I think the judge showed that she is incredibly hostile towards Mr. Manafort and exhibited a level of callousness that I have not seen in a white collar case in over fifteen years of prosecution,” he said.

Manafort could face years in prison if he's convicted for the charges.

The most serious of the charges, residential mortgage fraud, carries a prison sentence of a minimum of one to three years in prison and a maximum of just over eight to 25 years.

One thing to note: If Manafort is convicted for crimes in Manhattan, a presidential pardon wouldn’t apply.

Paul Manafort spoke briefly to Judge Amy Berman Jackson before he was sentenced today to an additional 43 months in prison.

During his remarks, Manafort apologized and said his "behavior in the future will be very different."

Here's what he said to the court:

In my previous allocution, I told Judge Ellis I was ashamed and that it was my conduct which brought me to that day of judgment. For it, I said I took full responsibility. Apparently I was not clear in saying what is in my heart. I say it now. I am sorry for what I have done that should bring me to this today.
The last two years have been the most difficult years that my family and I have ever experienced.
The person who I have been described as in public is not someone who I recognize. While I know that I am not that person, I feel shame and embarrassment for the suffering that I have caused to my family and friends and all who have been affected by my behavior.
Let me be very clear. I accept responsibility for the acts that have caused me to be here today. Furthermore, I want to apologize for all that I did that contribute to these actions and to the effects that they had on both people and institutions.
While I cannot undo the past, I can ensure that the future will be very different. I stand here today committing myself to this change.
I am especially upset at myself for the pain that I have caused to my family and my friends. If nothing else, their suffering will be a major deterrent to any future behavior of mine.
As I have sat in solitary confinement for the past nine months, I have reflected on my life and what is important to me. I can see that I have behaved in ways that did not always comport to my personal code of values. I am upset with myself for these failures and understand that many of these mistakes are what has brought me here today.
Because of this new self-awareness, I can say to you with conviction that my behavior in the future will be very different. I have already begun to change and I am confident that the lessons of the past two years will be the guide for my future.
What has been uplifting to me during his crisis is the incredible support I have received, not just from my family and friend's but from so many strangers.
I have been strengthened by the letters I have received from from all of them and have positively grown from their prayers and encouragement.
This exposure to the goodness of people has had an energizing impact on my life and has given me the ability to cope with the difficulties of being in solitary confinement.
Their encouragement has focused me on how I want to conduct my life when this ordeal is over.
I stand here today to assure the court that I am a different person from the one who first came before you in October of 2017.
I have had the time to reflect on my life and my choices, and the importance of family and friends. My reflections have instilled in me the commitment to turn my notoriety into a positive and show the world who I really am.
I see more clearly both myself and my life, both past and present.
I can assure you that I feel the pain from these reflections and I know that it was my conduct that brought me here today.
For all of my mistakes, I am remorseful.
With the power of prayer and God’s guiding hand, I know that my family and I will emerge stronger from our suffering, and I look forward to setting forth on this journey.
Again, I apologize to all who have been negatively affected by my behavior. I take responsibility for the consequences of my actions and pledge to do all I can to accelerate the healing process.
I appreciate the time that you have committed to this case and ask that you find compassion in your sentencing, if nor for me then for my family. I promise you that if you do, you will not regret it. Thank you.

Paul Manafort has been charged with a new criminal case not even an hour after learning his prison sentence for federal crimes.

A second federal judge had, minutes earlier, determined Manafort spend 7.5 years in total in federal prison for a decade’s worth of financial and lobbying crimes and obstruction of justice.

“No one is beyond the law in New York,” said District Attorney Cyrus Vance in New York, according to a statement.

A grand jury there approved the indictment on March 7.

Manafort had made broad admissions and apologized for his crimes. He has not yet entered a plea in the Manhattan case.

Manafort allegedly committed financial crimes in New York from 2015 through 2018, which stretches over his time as Trump campaign chairman.

Federal prosecutors separately took him to trial last summer over mortgage fraud that began when his Ukrainian lobbying income declined around 2015 and reached into 2017, they said. Manafort even attempting to use his sway as a political heavyweight to lock down money from banks to supplement his income. He later admitted to that activity, federal prosecutors alleged at his trial. 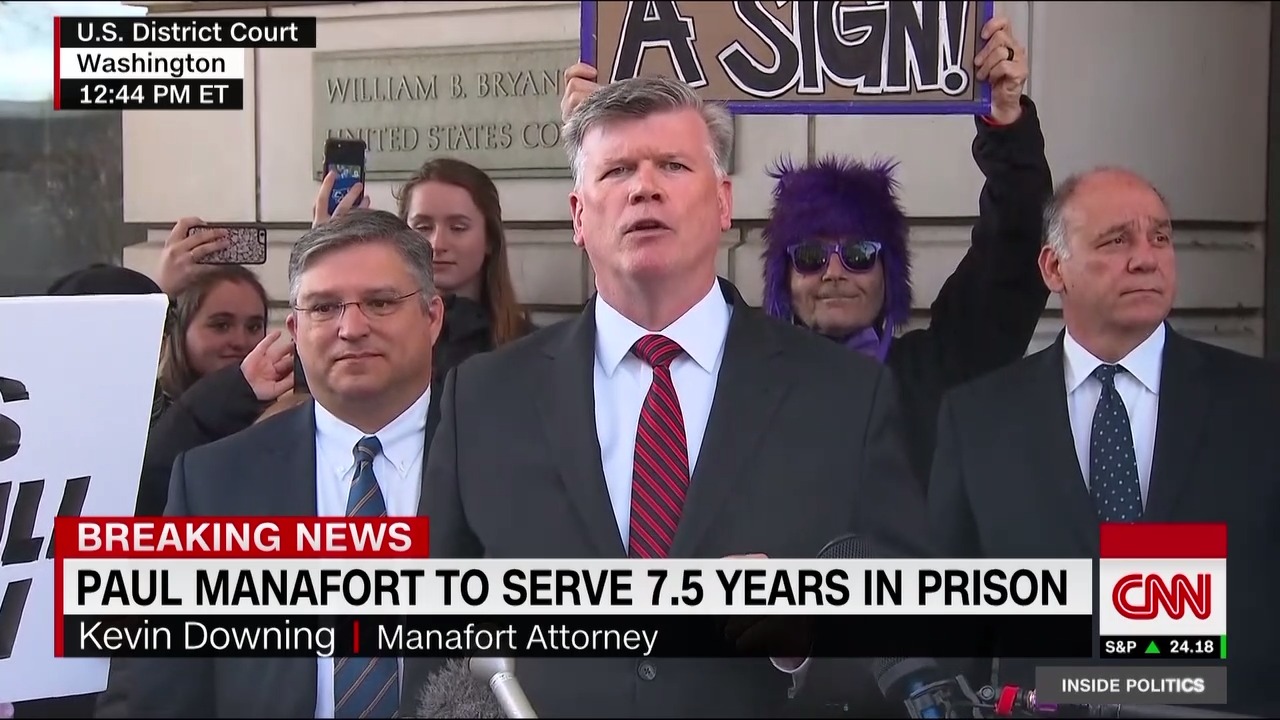 He started by saying Judge Amy Berman Jackson "conceded that there was absolutely no evidence of any Russian collusion in this case."

"So that makes two courts, two courts have ruled no evidence of any collusion with the Russians," Downing said.

Protesters nearby started chanting "liar" and heckled Downing as he gave the rest of his statement.

Earlier today, Manafort was sentenced in a DC court to serve an additional 43 months in prison on top of his sentence he received last week from the court in Virginia.

Manafort will serve a total of seven and a half years in prison for two cases.

He has not yet entered a plea in the Manhattan case.