Our live coverage has ended. You can read more about the floods here.

Four of the children who were found dead in Knott County following the devastating flooding in eastern Kentucky were siblings, their aunt Brandi Smith told CNN on Friday.

Smith is the sister of the children’s mother, Amber Smith, and identified the four children as Chance, age 2; Nevaeh, age 4; Riley Jr., age 6; and Madison, age 8.

According to Smith, who learned of the deaths from the children's mother, the family’s trailer home became quickly flooded with water forcing the family to seek shelter on the roof.

“They were holding on to them. The water got so strong it just washed them away. It pulled on them from their arms,” Smith said when describing how her sister and her partner, Riley Noble, tried to save their kids.

Smith said the couple had to wait several hours to be rescued and even though they’re physically okay, they’re still in shock.

She described her nieces and nephews as sweet, funny and lovable children.

Getting a reliable number of the people who are missing or dead in eastern Kentucky flooding has been nearly impossible due to the infrastructure that has been damaged, Gov. Andy Beshear said Friday evening.

“There are people out there all across Kentucky and America that are scared because they can't reach their relatives, with cell phone systems down, thousands without power, and water systems overwhelmed,” Beshear told CNN’s Wolf Blitzer.

The tracking website PowerOutage.us indicated that a majority of power customers in Knott and Letcher Counties were still in the dark Friday evening, with thousands more without power in neighboring Letcher and Perry Counties.

The governor said the official death toll of 16 “could potentially double” as more information comes in from county officials. Beshear said the water will have to begin receding to the upcoming days before they can think about what it will take to rebuild.

The West Virginia National Guard sent two UH-60M Blackhawks and two Lakota aircraft with crews comprising of 14 soldiers to assist in the flood response in eastern Kentucky, according to a statement.

In a tweet Friday, the National Guard said that the aircraft has hoist capabilities.

West Virginia National Guard Major General William Crane said in a tweet that he could not “begin to describe how incredibly proud I am of our @WVNaitonalGuard Soldiers as they demonstrate the spirit of the @USNationalGuard – always ready, always there.

Crane posted video footage from a rescue today in Southeast Kentucky by a crew from C Co 2/104th GASB (MEDEVAC).

West Virginia Gov. Jim Justice thanked National Guard members assisting in the rescue efforts in a tweet Friday. He added that he and his wife are “continuing to pray for those who have lost loved ones and are still searching.”

At least 14 are confirmed dead as a result of flooding in Knott County, Kentucky, northeast of the town of Hazard, according to the county coroner.

It is not immediately clear how this factors into the state's overall death toll.

The last official statewide update included 11 deaths in Knott County and 16 deaths statewide. The governor declined to provide an updated statewide death toll during a Friday afternoon news conference, saying they were still getting updates from local officials.

President Joe Biden confirmed on Twitter that he connected with Kentucky Gov. Andy Beshear about the flash-flooding in the state that has destroyed communities, caused power outages and killed at least 16 people.

"I spoke with Governor Beshear and Senator McConnell today to offer the full support of the federal government to the people of Kentucky in response to the devastating flooding," President Biden said from his official Twitter account.

The tweet includes a photo of Biden on the phone and looking at a map.

Flash flooding, like the kind that devastated parts of eastern Kentucky and killed more than a dozen people, are dangerous because it is powerful and happens quickly.

Now, more than ever, it's important to have a plan and make sure you are prepared for an emergency. That's because heavy rainfall is becoming more common due to climate change. Rainfall over land has become more intense since the 1980s, according to the UN’s Intergovernmental Panel on Climate Change (IPCC). The report’s authors say human influence is the main driver.

Here are a few other bits of advice for a flash flood emergency:

Watch to learn more about why flash flooding is so dangerous: 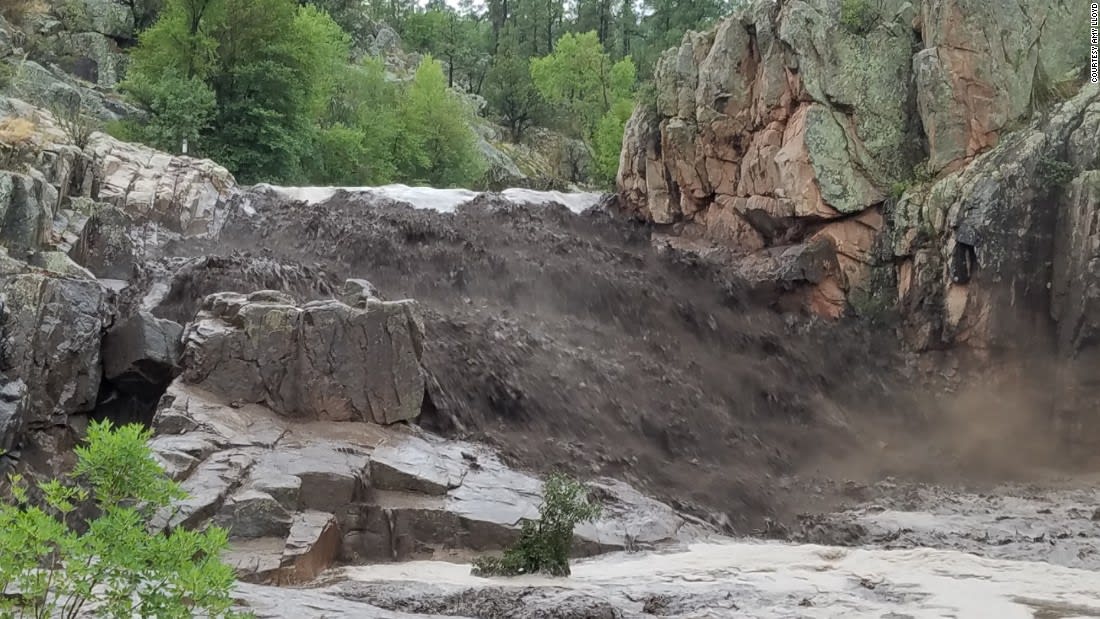 Flash flooding explained: What it is and why it's so dangerous - CNN Video

Chloe Adams, 17, saved herself and her dog by swimming to a neighbor’s roof where she sat for several hours until she was rescued during Thursday’s flooding in Kentucky.

Terry Adams, the teen’s father, told CNN his daughter was at home in Whitesburg, Kentucky, when the flash flooding started. Adams said his daughter saved her dog by putting the dog in a plastic container and swimming with it to a nearby roof.

Chloe lives with her grandfather but they were separated when the rushing flood waters made it impossible for Chloe to reach her grandfather, her father said. The family took shelter in her uncle’s home while Chloe had to wait to be rescued.

“My daughter is safe and whole tonight,” Adams posted on Facebook. “We lost everything today...everything except what matters most.”

According to Adams, his daughter was rescued by a man who used his kayak to save the teen and her dog. Chloe’s grandfather also escaped uninjured.

Adams shared a photo with CNN, which showed his daughter and her dog sitting on the roof of a home while everything around them was under several feet of water.

Chloe told CNN she’s still in shock and processing everything that happened. She took a video of what she was witnessed while she waited on the roof. The video shows Chloe and her dog sitting on a small section of a roof that is mostly under water while surrounded by flood waters.

The largest health service in eastern Kentucky has not been able to reach more than two dozen of its employees since devastating flooding began in the region Thursday.

Phillips said most of the missing employees work at the ARH hospital in Hazard, one of the largest of their 12 hospitals in Kentucky. “We pray that our employees are healthy and safe,” she said.

All ARH hospitals have remained open during the crisis, although some workers have had to be reassigned to other locations in order to cover unavailable workers, according to Phillips. She says many of their nearly 100 clinics are closed.

“We have one clinic that we believe we have lost completely,” said Phillips, with another two possibly unsalvageable in Floyd County.

Despite difficulties with staffing and accessibility, Phillips says ARH has been able to continue critical functions at all of its hospitals.

“Our emergency departments are very, very busy,” she said.

Water levels are still in a major flood stage — Level 3 of 3 — but are forecast to gradually decrease over the next 24 to 48 hours.

The current forecast has the river at this location dropping to moderate flood stage — Level 2 of 3 — by Friday evening and below flood levels by Saturday eveni ng.

Click here to track where the flooding has been the heaviest over the last 24 hours.